(The Nosher/JTA) October is upon us. I know because my Instagram feed is full of decorative gourds and pumpkin spice lattes. But, as much as Americans truly love pumpkin, we are sometimes guilty of type-casting this nutritious vegetable as sweet and forget that pumpkin has a savory side too. Happily, Sephardic cuisine abounds with savory pumpkin dishes to remind us of this fall vegetable’s versatility. My favorite of these is chershi kara’a, a tangy, spicy pumpkin spread created by Libyan Jews and now a favorite among Israelis.

Chershi (sometimes spelled chirshi or tershi) are spicy, highly flavored condiments or dips that are typically served as part of mezze, the spread of hot and cold dishes that precede the main meal in the Middle East and North Africa. Pumpkin chershi is among the most famous.

I first learned about pumpkin chershi when I attended an event hosted by the Israeli consulate in Chicago. The event featured leading Israeli food personality Gil Hovav making some traditional Sephardic dishes from his childhood, one of which was pumpkin chershi. One taste of Gil’s savory, spicy chershi and I was hooked. 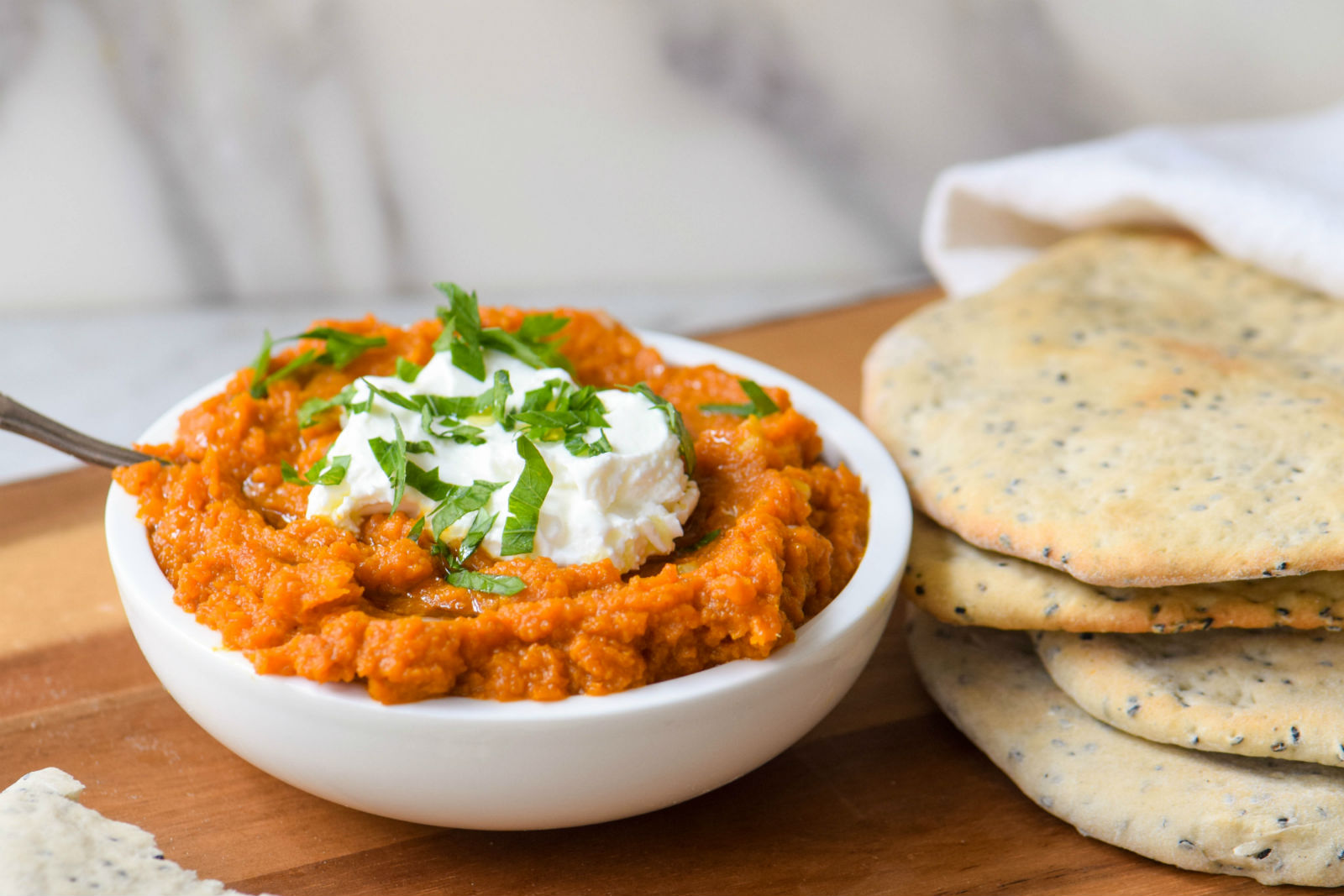 As is often the case in Jewish cuisine, there are many ways to make pumpkin chershi. In his dish, for example, Gil Hovav mixes pumpkin with carrot and potato. Others use only pumpkin. But everyone seems to agree that chershi kara’a should be spicy and tangy, with lots of garlic and lemon juice.

One of the best things about pumpkin chershi is how easy it is to make. Using canned pumpkin puree, this recipe comes together in a few minutes. The only ingredient you might not have on hand is the harissa, but these days, it is easy to find at the grocery store. (Gil Hovav argues that powdered caraway seed is essential to chershi, but I have seen plenty of recipes without it and since few Americans have this spice in their pantries, I omitted it.)

My goal with this pumpkin chershi recipe was to create a nice balance of sweetness, heat, and acid. I guarantee that it will change how you think about pumpkin. How best to eat it? Chershi makes a fantastic dip alongside some warm pita with a dollop of cool yogurt on top. But don’t stop there. Chershi also works as a sandwich spread and it has traditionally been eaten as a garnish for couscous.

So, this fall, take a break from pumpkin bread and pumpkin spice lattes and make something new and especially Jewish with pumpkin.

Note: The spread will keep in refrigerator for a week.

Breads for Counting Ahead

Celebrate the First Shabbat After Passover with a Shlissel Challah