The Cultural Blender That Is Israeli Food

For cookbook author Adeena Sussman, ‘Food is like the Talmud. The best things happen when there’s a dialectic going on.’

The first is her love of Israeli cuisine, and the second is the story that led to the book. A much-respected food writer for decades, Sussman had been visiting Israel all of her life. A few years ago, while living in New York, she was introduced to the man who is now her husband, an American expatriate living in Israel. She subsequently moved there in 2015, and they created a home just steps from Tel Aviv’s Carmel Market. With daily visits to the market, she has gotten to know many merchants, their specialties and their stories.

“Sababa: Fresh, Sunny Flavors from My Israeli Kitchen” (Avery) includes 125 recipes illustrated with color photographs. It’s a writer’s book with anecdotes about Israeli life, which so often centers around food and gatherings. Sussman’s warmth and spirit of hospitality underline the recipes.

While Sussman has co-authored 11 cookbooks, this is her first solo book. She writes frequently about Israeli food for many magazines and newspapers and during the late 1990s, contributed to The Jewish Week.

I catch up with Sussman at the end of the first leg of her multiple-city tour through America. With her exuberance, she may be the best ambassador Israel has. The book’s title, “Sababa,” is drawn from the Arabic phrase tzababa, which means it’s all good — now a common Israeli greeting that suggests that everything is awesome. 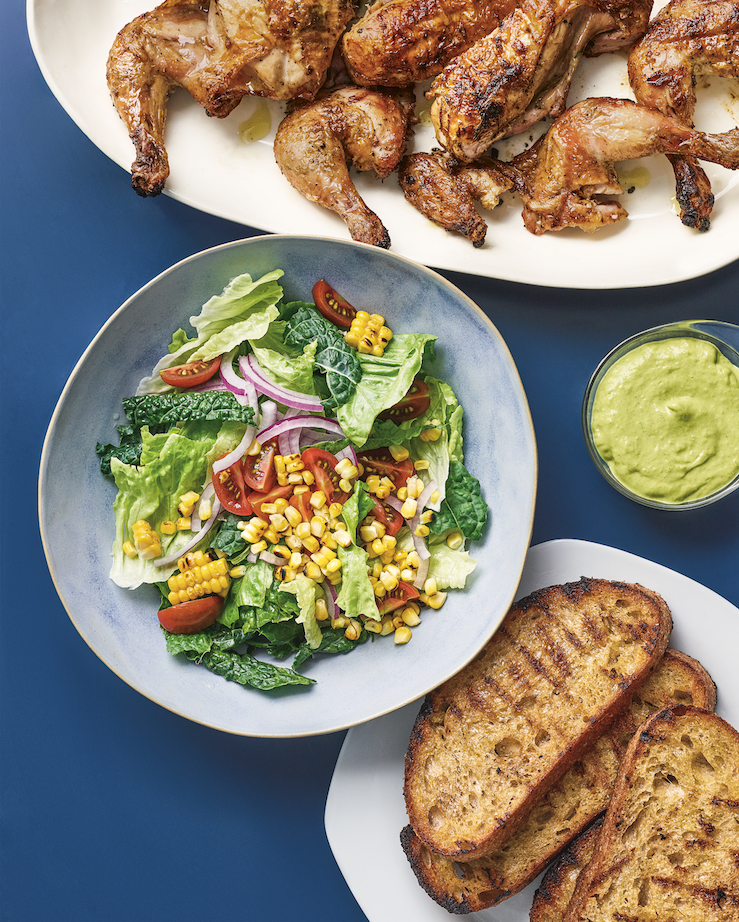 From the cookbook: Grilled chicken & corn salad with Sussmans spin on a green goddess dressing that incorporates avocado and za’atar. Courtesy of Dan Perez

For Sussman, Tel Aviv is the best food city in the world. She admits that she shops for produce the way others might scour the racks for clothing. She is nowhere at home as much as in the Carmel Market, which she describes as a collection of 100 businesses within a half mile; many are family enterprises now run by the third generation. She says it’s grittier than Jerusalem’s Mahane Yehudah, which has been renovated over the years.

Curious and outgoing, Sussman loves talking about food, looking at recipes, asking questions and improvising in her own kitchen. She says, “Food is like the Talmud in its heyday. The best things happen when there’s a dialectic going on.” She cites the mixing of cultures in Israel, where a Yemenite cook may be serving a typical Yemenite bread, kubaneh, with small salads from a range of different cuisines, adding her own interpretation.

Sussman, who is 48, has developed thousands of recipes over the years; she says, “Developing a recipe is like creating a computer code. There are certain things that are commonly held: If I cook a certain type of onion in a certain type of oil in certain of pan at a certain temperature, I’ll yield a certain result — that’s a line of code in a recipe. I have all those code lines embedded from so much experience. It’s about what do you do to add new codes.” 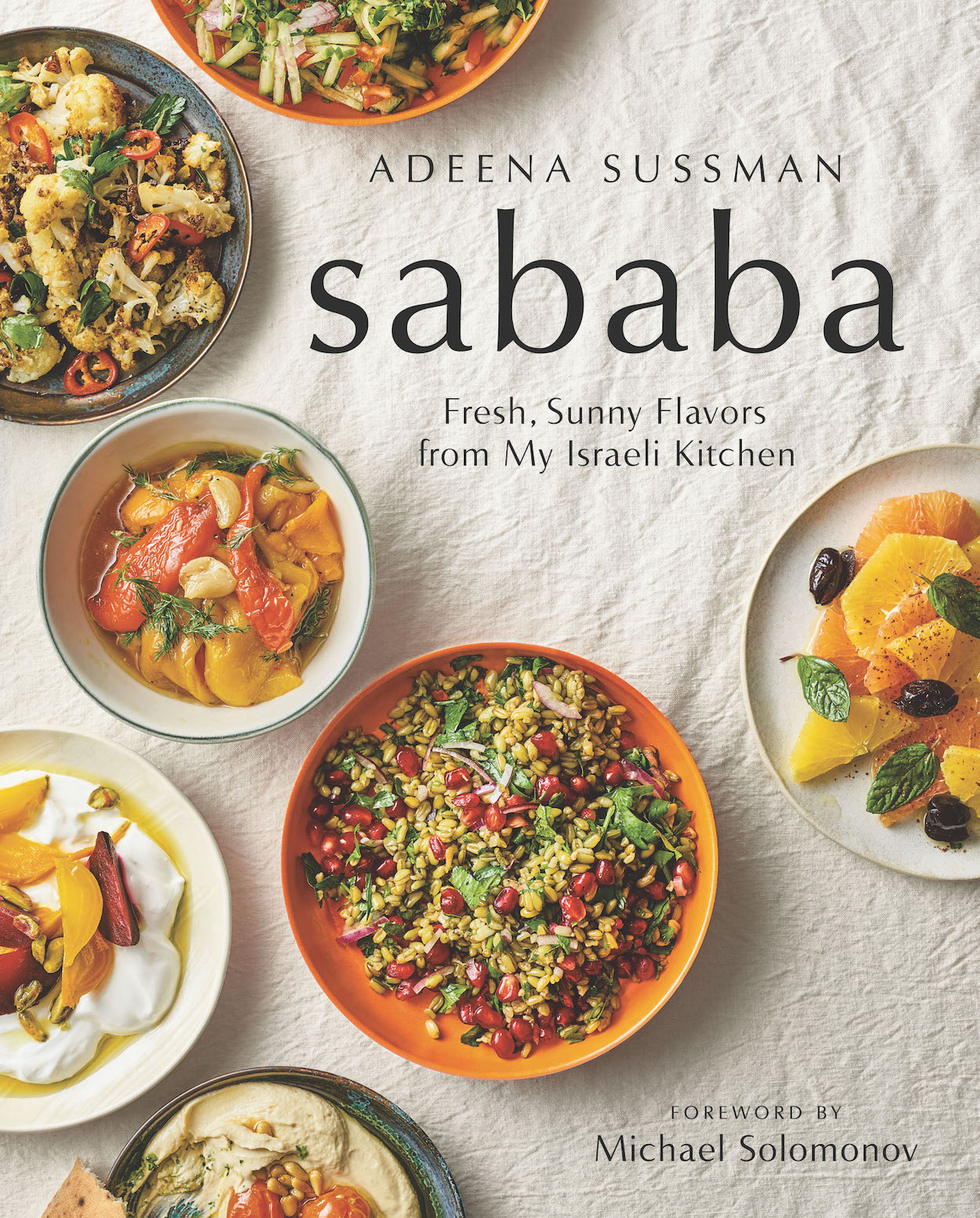 She continues, “It’s about the seasoning you add, and it’s about the voice you use to share the recipe, the headnotes, the recipe text. I share a lot of advice and reassurance. I imbue my own personality on a recipe.”

Her cooking choices are guided by the seasons. Most of her recipes have surprising twists, in which she really pushes the flavors. Sussman adds cardamom to her schug, and in her cookbook she features her late mother’s overnight chicken soup, infused with hawaiij, a Yemenite spice blend. She learned a lot about spices from cooking with some Druse women in the Galilee. Her recipes encourage the use of tahini, sumac, silan (date syrup), harissa and zaatar.

“Sababa” is published at a moment when Israeli food has gained wide popularity outside of Israel, and Israeli restaurants are opening in New York City and beyond.

“I think the food is fresh, healthyish; the flavors are transportive. The ingredients aren’t crazy but things we are familiar with in some way. The food is really tasty, with a lot of acidity and lemon. Italian food is more vinegar-based. People like the freshness of citrus and chilis and the lightness of the food.

“And it’s moving past a trend. Trader Joe’s sells schug, harissa and bamba. Israeli food is where Italian food was here, 30 years ago. Balsamic vinegar was a trend and now it’s in every house. Soon shakshuka will be on every brunch menu.”

Sussman’s interest in food dates back to her Orthodox upbringing in Palo Alto, Calif. There wasn’t a lot of prepared kosher food available, so her mother made everything, and Sussman and her sister learned at her side. The two cookbooks they used most were a Chabad collection called “Spice and Spirit” and Craig Claiborne’s “The New York Times Cookbook.”

“More than teaching us how to cook, she taught us to be comfortable in the kitchen,” Sussman says of her mother. “Nothing was scary or foreign. We each developed our own cooking style. For my mother, there were no mistakes in cooking, only happy accidents.” 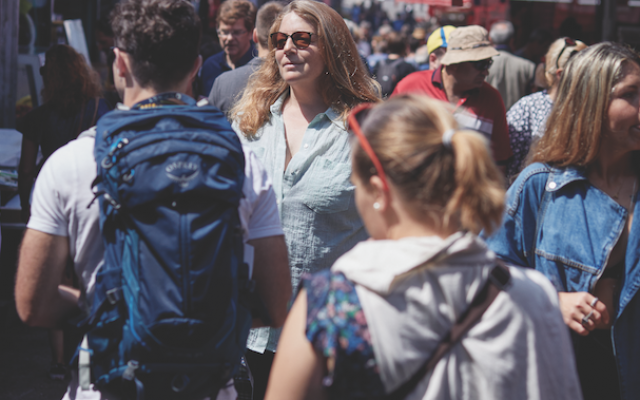 “For me cooking is as much about a vibe and mood, as about ingredients,” she says. “Being in Israel reinforced things I learned in childhood about not seeking perfection when cooking, not being too attached to a specific recipe or meal. I feel very comfortable taking elements from different things and putting them together — I try not to let hard and fast rules completely dictate my cooking.

Cooking is her form of creativity and relaxation; it’s also a way she processing memory, and it’s very social. In Tel Aviv, she is used to welcoming guests unexpectedly and always has a few things on hand to create a simple meal. She says, “It’s not like New York, where spontaneity is scheduled in 15-minute increments.”

These days Susman no longer keeps kosher, although “the book is kosher, and that’s very important for me and it didn’t feel like a sacrifice. My default home cooking is kosher-style cooking; it’s what I gravitate to — it’s rare that I would cook meat in butter or use bacon. I wanted my sister and my religious friends to be able to cook without substitutions.”

“When I stopped keeping kosher, it had a lot had to do with the desire to explore the world and travel. I didn’t want to limit what I should eat, who I could eat with, what I could learn. I like to eat the way people are eating in their own homes. It’s not about me, it’s about them.”

She adds, “I haven’t felt judged by the kosher community. They know I respect them. My family is very supportive.”

I ask Sussman about efforts to use food as a bridge, bringing together Israeli and Palestinian women to cook. together.

“It’s challenging,” she says. “I have tried but I haven’t tried hard enough.” 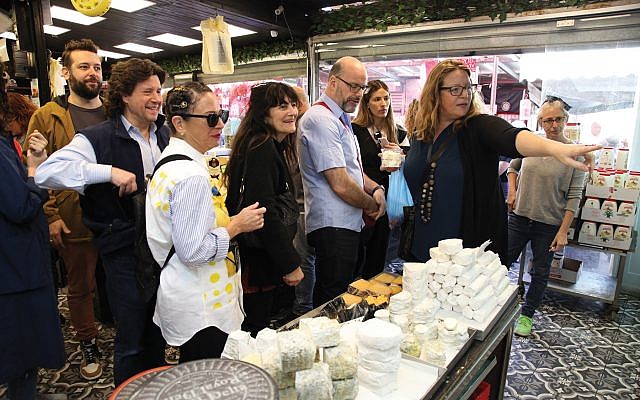 Sussman and her sister Sharon Wieder have spearheaded a cooking project to raise funds for cancer research (their mother and grandmother died of ovarian cancer). To date, Pies for Prevention, now in its 11th year and active in 30 communities in the weeks leading up to Thanksgiving, has raised over a half-million dollars.

One of the next projects on her plate is a book with the folks who run Café Levinsky in the Levinsky Market adjacent to the Carmel Market. The “postage-sized café” is known for its take on Israel’s culture of gazoz — drinks traditionally combining seltzer and syrup; the café mixes in herbs, flowers, fruit, leafy greens and some fermented concoctions, and serves the colorful drinks beautifully. Then Sussman will be co-authoring another book with a chef, and she looks forward to doing another project on her own.

She had been thinking about writing an Israeli cookbook for years, even before she moved to Israel. As an outsider though, she knew that she couldn’t get deep enough. But when she met her now husband and started spending more time in the Carmel Market, she says, “A lot of pieces fell into place for me. I still wondered what I could add to the conversation that hadn’t been said by [chefs and restauranteurs] Michael Solomonov and Einat Admony, who are wonderful. When I let go of the idea of doing a comprehensive guide, I realized that my story of being an American living in Israel, cooking every day and interpreting the ingredients was something different. There’s a richness that comes from living in and understanding a place.”

Get Groceries Delivered to Your Door with These Helpful Services

Get Groceries Delivered to Your Door with These Helpful Services

A Bite in the Apple: How Jewish Fare is Faring