In the Galilean city, best known for its Christian significance, a long-established and lively food culture is tempting an increasing number of culinary tourists.

The Lower Galilee city of Nazareth has a magical, ancient feel with its stone structures and open-market merchants selling Armenian ceramics and Finjan coffeepots.

However, in this city where Christian and Muslim Arabs live together, there is a definite mix of old and new, East and West, at every corner. 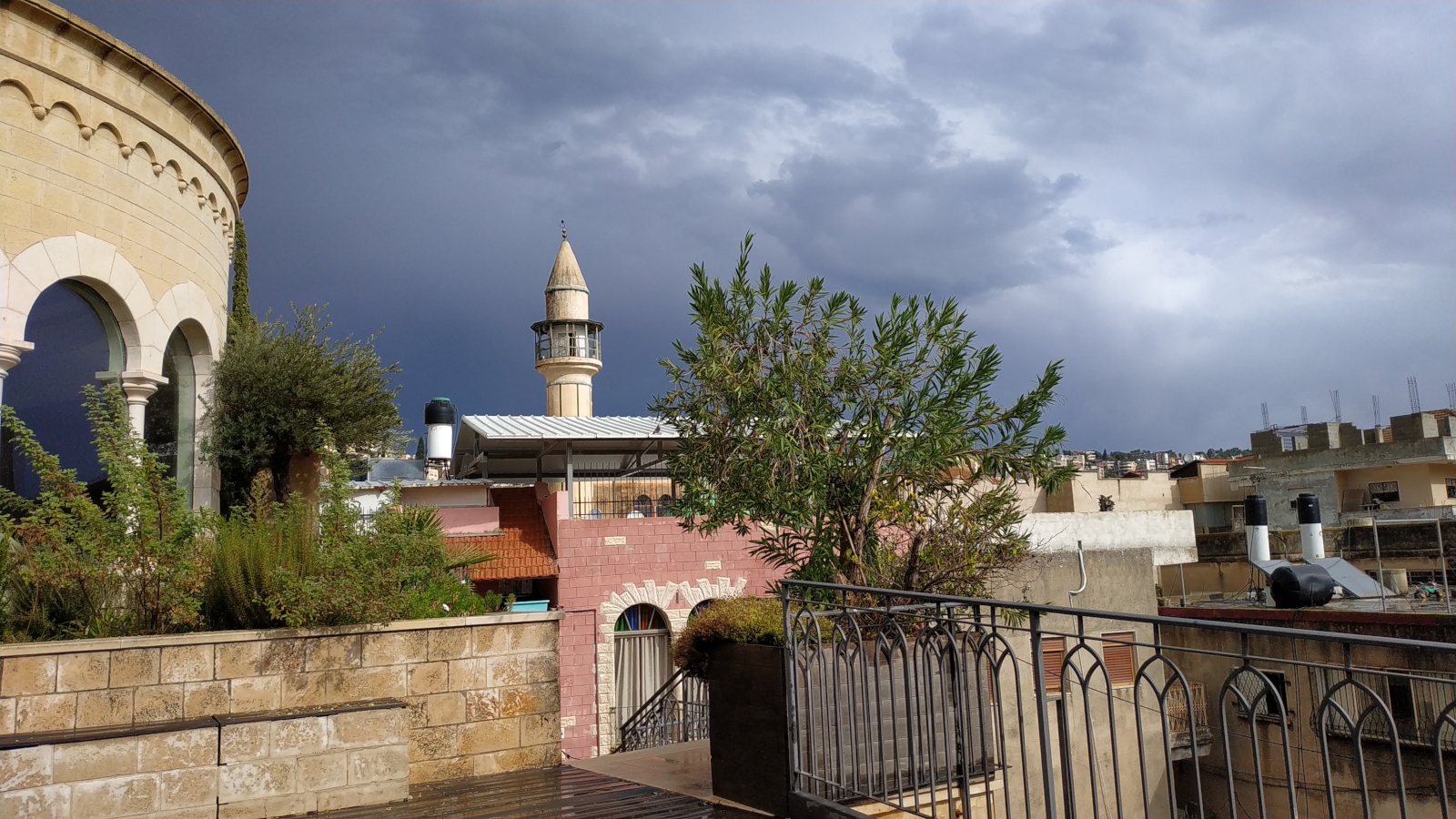 A rooftop view of Nazareth. Photo by Jessica Halfin

Since this is the hometown of Jesus, there are plenty of fascinating churches and other Christian sites to visit — many along the food tour path described below — but Nazareth also has a long history of food culture best experienced by visiting the city’s extraordinary vendors and shops.

Here is your guide to Nazareth’s best quick bites, all reachable by foot on a morning’s self-guided tour.

Two recommendations before you set out: Start out around 11am, as many of these locations are lunch spots; and bring a cooler for leftovers or for the food you’ll want to take away to enjoy later. 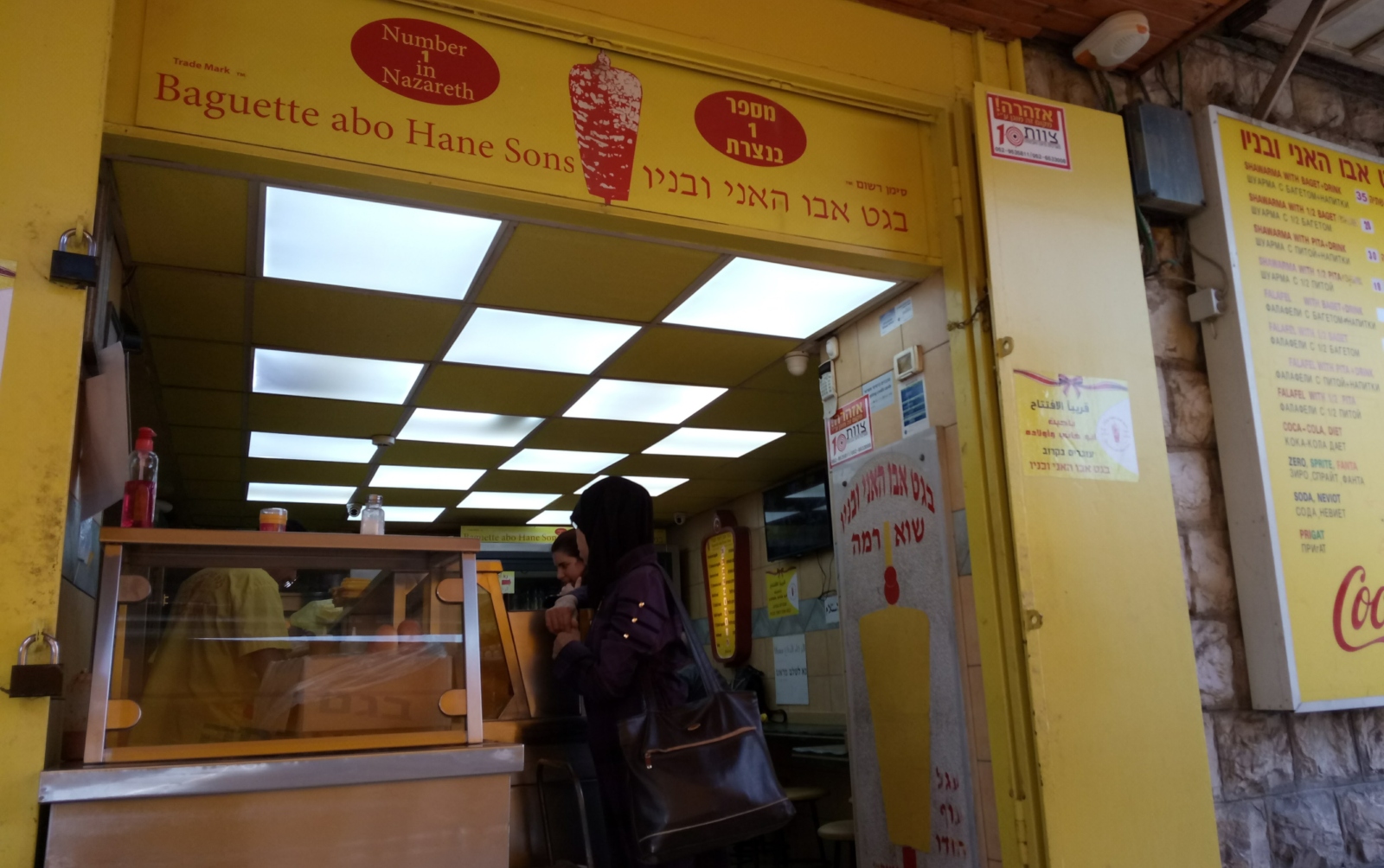 With a slogan like this — “You haven’t really been to Nazareth unless you’ve eaten our shawarma” — you know you’ve got to start off your epic food tour right here.

Spot it easily for its bright yellow sign with red writing, as you near Ha-Ir Square, which faces several of the city’s churches, including St. Joseph’s Church and the Basilica Church of the Annunciation. 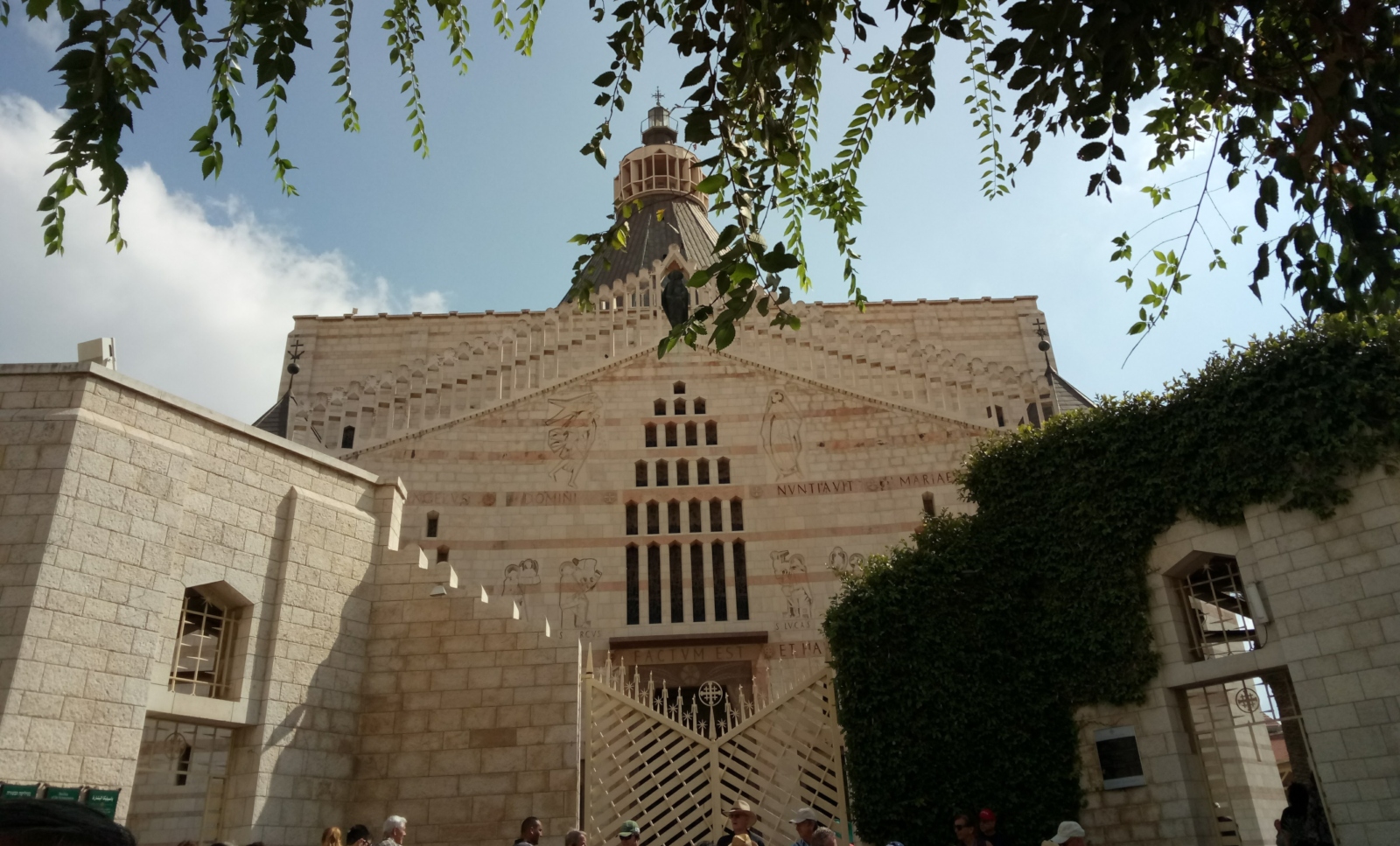 Shawarma, for the uninitiated, is shaved chunks of slow-roasted meat, often lamb. Here, you can choose to dine on a giant shawarma served in a soft supermarket-style baguette, but unless you split it with your companion you’ll be too stuffed to enjoy the rest of the tour.

The safer choice to start off a long day of snacks is a more manageable half-order in a pita. Make sure to accept all the salads offered to keep your perfectly spiced meat company in your sandwich.

What to order: Half portion of shawarma in pita with salads and tahini sauce 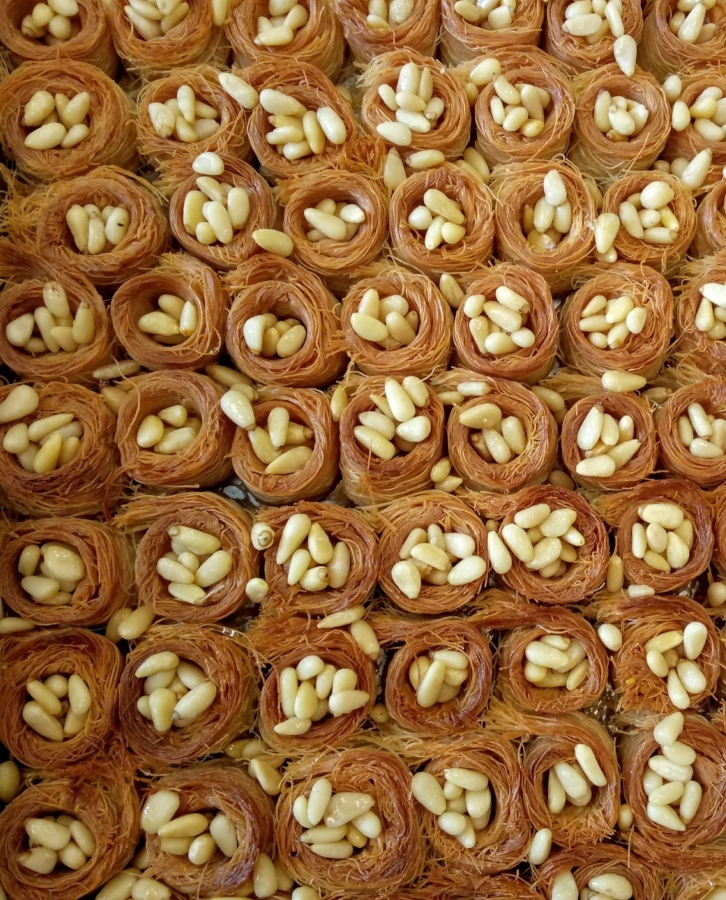 Just a few doors up the street toward Ha-Ir Square in a shop whose sign features a photo of the family patriarch, you’ll find a most worthy dessert in the Mahroum family’s knafeh –– a warm dish of bright orange phyllo “noodles” baked in butter beneath a layer of sweet sheep’s cheese, subsequently flipped and drenched in syrup.

This is the original location of what has become a 130-year-long Arabic sweets empire with shops throughout Nazareth, Haifa and the West Bank.

Theirs is an exceptionally buttery knafeh not to be missed. But we wouldn’t judge you should you decide to sample many different varieties of baklauwa (baklava) or other Arabic specialty confections made here.

Enjoy the old-school charm here before continuing to your next stop, just a few minutes’ walk up Al Bishara Street to the Old City Bazaar. 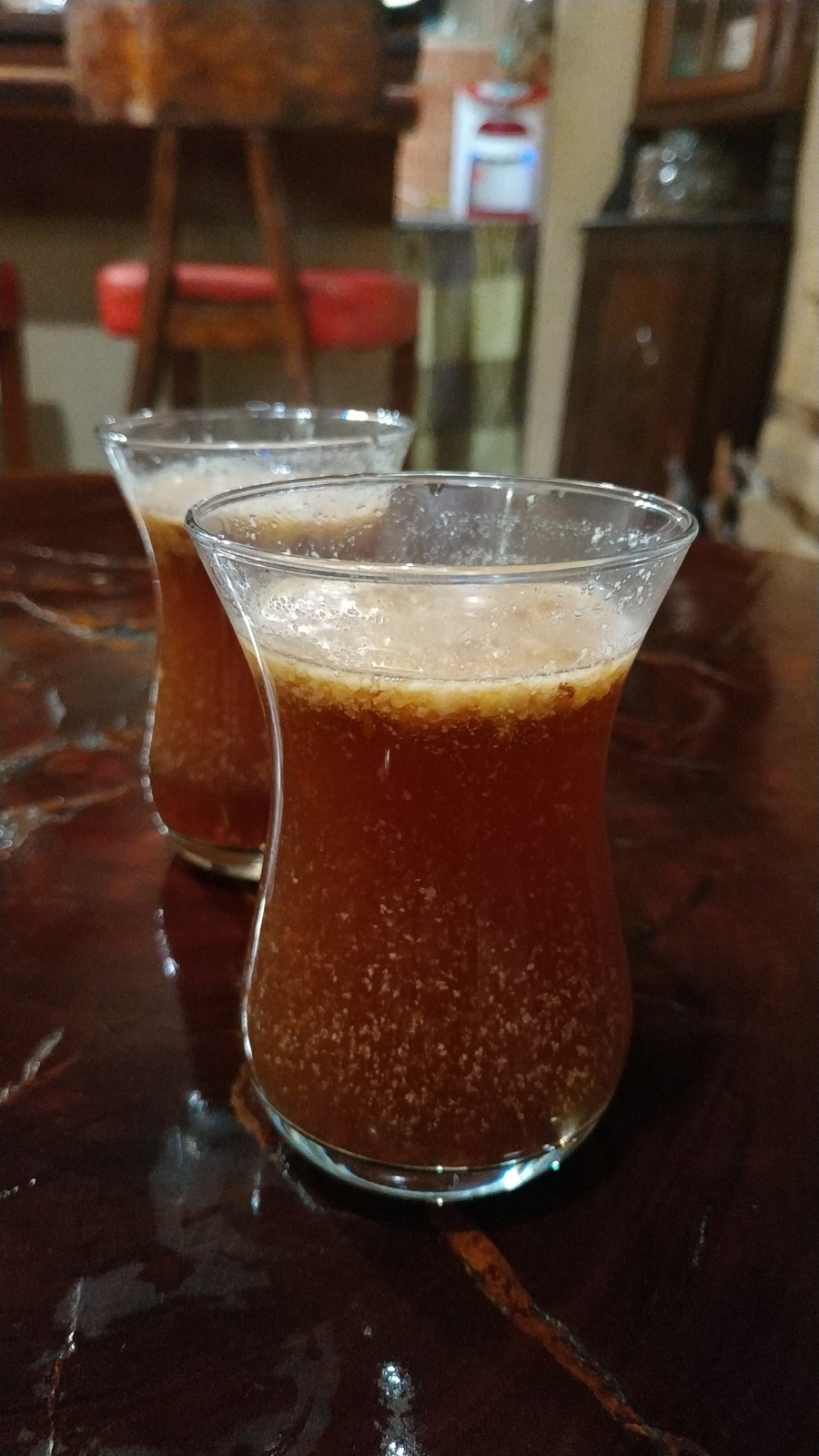 Cinnamon-walnut tea is a specialty at Café Abu Salem in Nazareth. Photo by Jessica Halfin

Pass through the stone walkways and various vendors of the covered market, and you will eventually find Café Abu Salem. With a men’s backgammon club in the back, and welcoming traditional coffeehouse in the front, this small shop hidden in a 100-year-old stone building in the back alleyways of Nazareth’s Old City Bazaar is worth a stop for a caffeine boost.

Café Abu Salem specializes in Arabic-style espresso made to order in a traditional coffeepot, and cinnamon-walnut tea made from cinnamon bark steeped for hours, then mixed with chopped walnuts to order — a drink once given to women to help them regain their strength after giving birth.

This stop is a delicious and interesting anthropological experience rolled into one.

What to order: Cinnamon-walnut tea 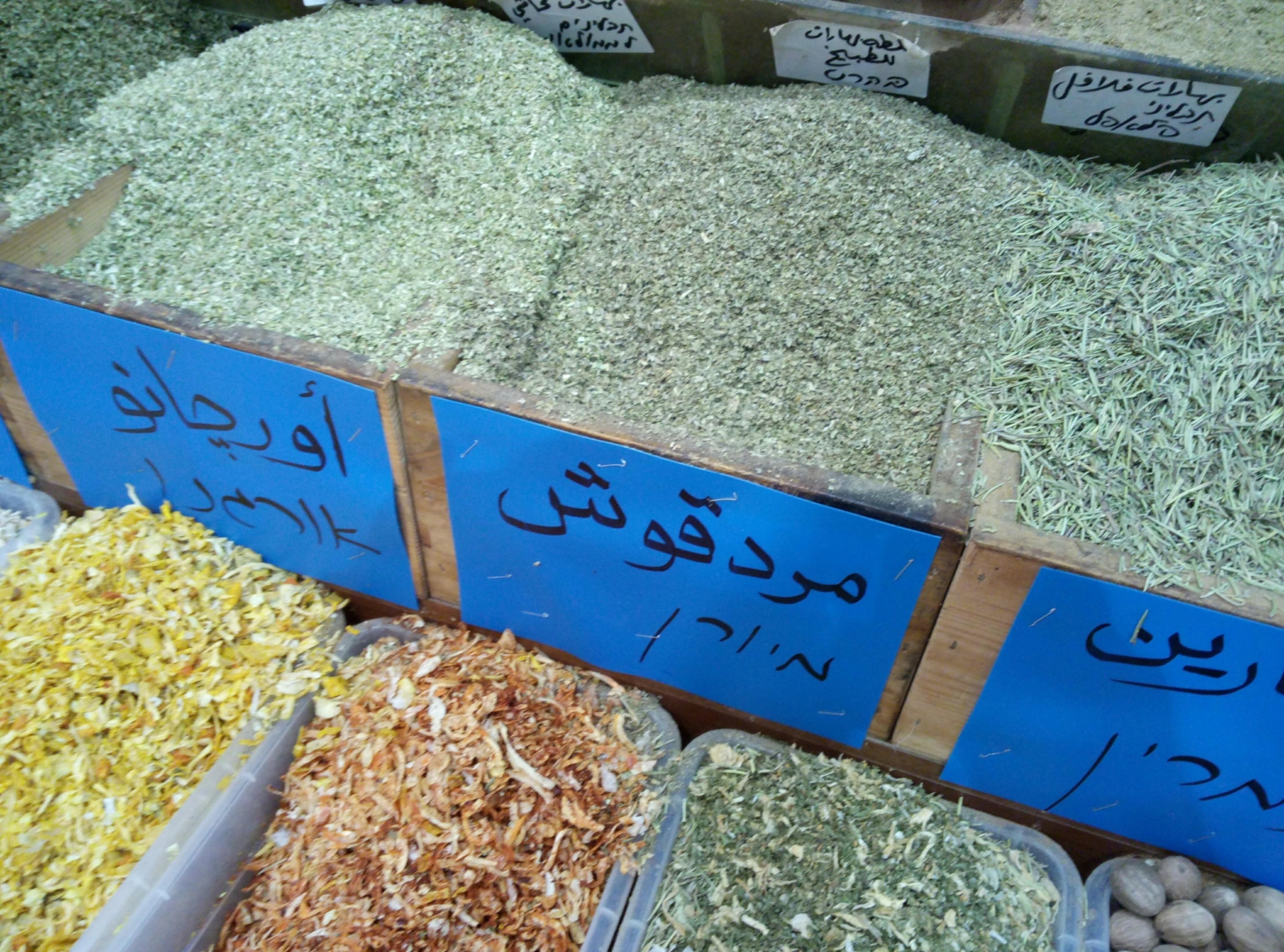 Dried herbs for sale in Nazareth. Photo by Jessica Halfin

This charming one-stop spice and baking supply shop in a 250-year-old building carries more than 1,000 different spices and custom blends, as well as coffee, teas, candies, grains and pulses.

If you find yourself in the mood for a chat, be sure to ask for the owners — brothers Jarjoura and Tony Kanaza — who are passionate about what they do, and love to share their knowledge with customers. They can help you begin to understand seasonings such as zaatar and sumac, staple spices in the local cuisine.

This newly renovated spot, just a 10-minute walk from the market toward the Golden Crown Hotel and Mary’s Well, serves up a golden falafel considered by many to be the best in the area.

Here they fry up the rich falafel balls to order using a special tool, then stuff them in a pita alongside several brightly colored salads and pickles. Do not pass up the communal bowl of Galilean olives to be enjoyed in between bites. Also not to be missed are shifla, spicy little banana peppers.

What to order: Half portion of falafel with all the fixings, including assorted pickles (check out the bright purple pickled baby eggplants!), and tart and creamy tahini sauce 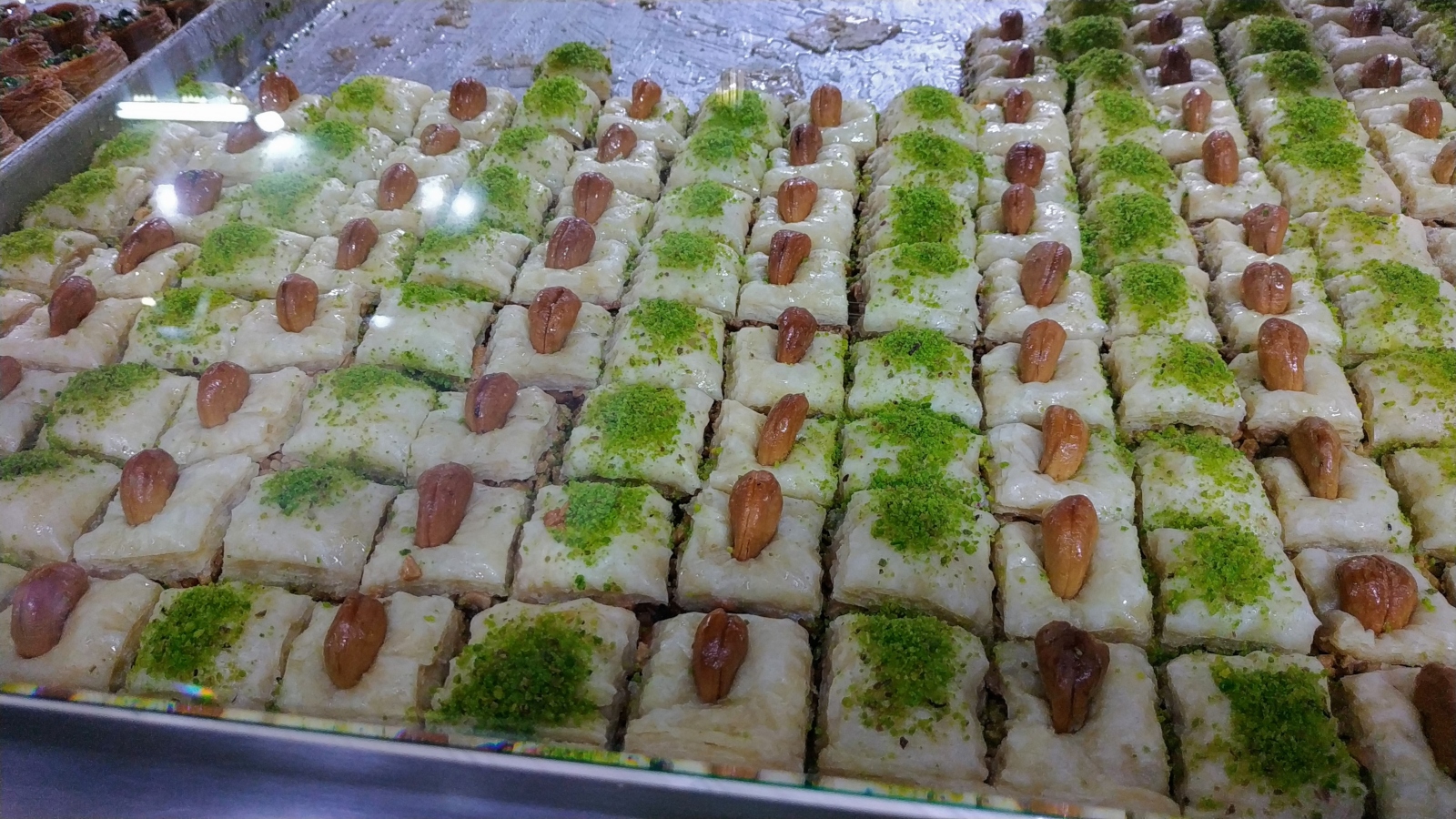 An 8-minute walk back toward the starting point from your last stop, Al Mokhtar Sweets has been a staple of the Nazareth bakery scene since 1968. Just the ticket for those looking to cleanse the palate with a sweet syrupy bite.

We suggest the following: Partake in a knafeh if only to compare and contrast with your previous experience (you will soon be an expert on the topic!), take a sampling of baklava with you for later, or try their delectable kataif – a phyllo pocket filled with sweet cheese or ground walnuts and spices — while you admire the family photos framed and hanging on the wall, and watch the giant deep-dish trays carried from the oven to the display. 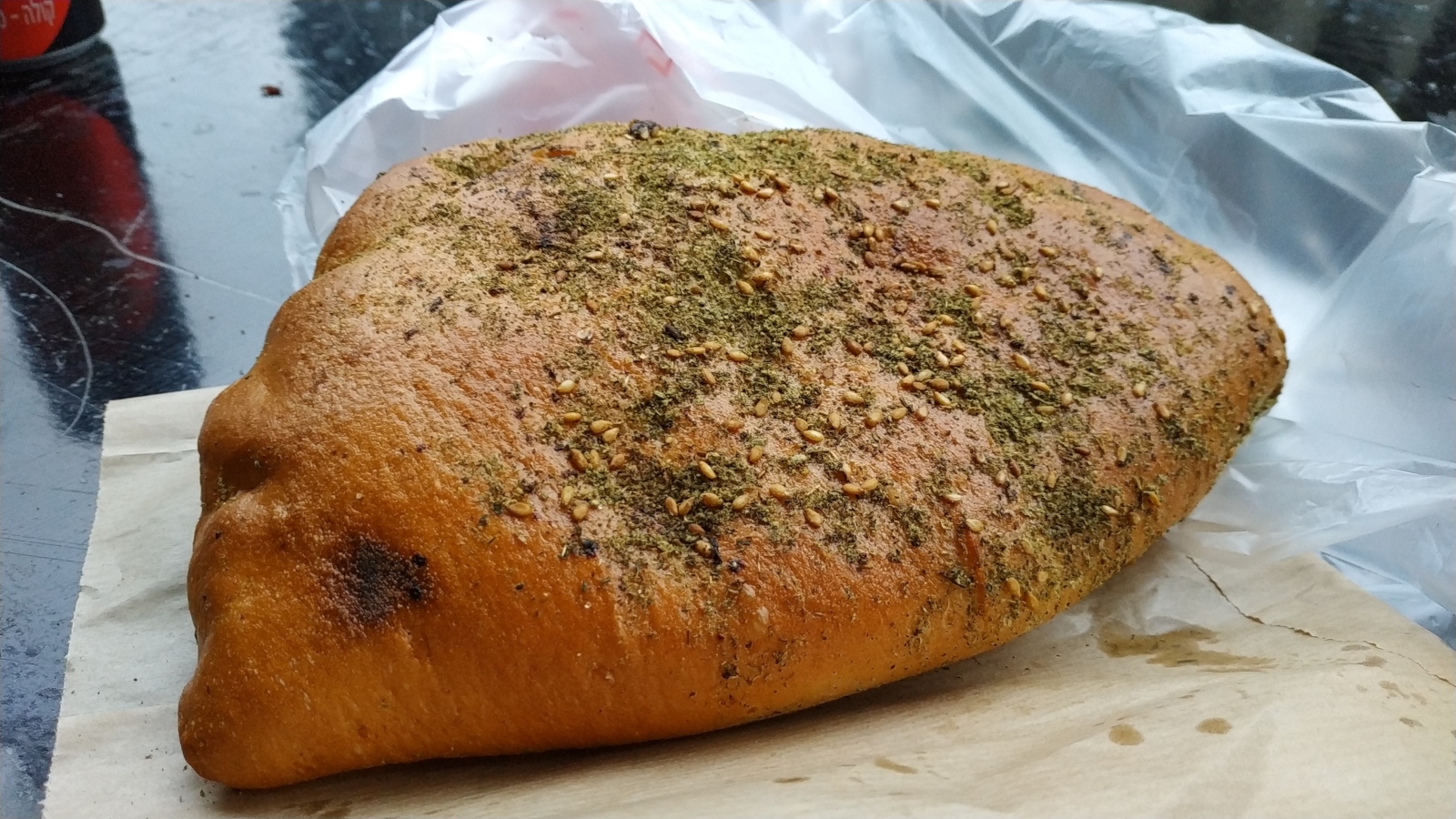 Nearing the end of your tour, head back to where you started your day. This bakery is located around the corner on a parallel street. Here you can get a look back in time at how bread bakeries have been turning out savory sambusak pastries for centuries.

Sold in many different flavor combinations such as Arabic cheese and olives, and sumac-garnished shredded chicken, they are almost as fun to eat as they are to watch baking in the fiery hot tabun oven at the back of the shop.

Bonus: Watch how fresh pita bread is manufactured on special machinery at the shop’s front. 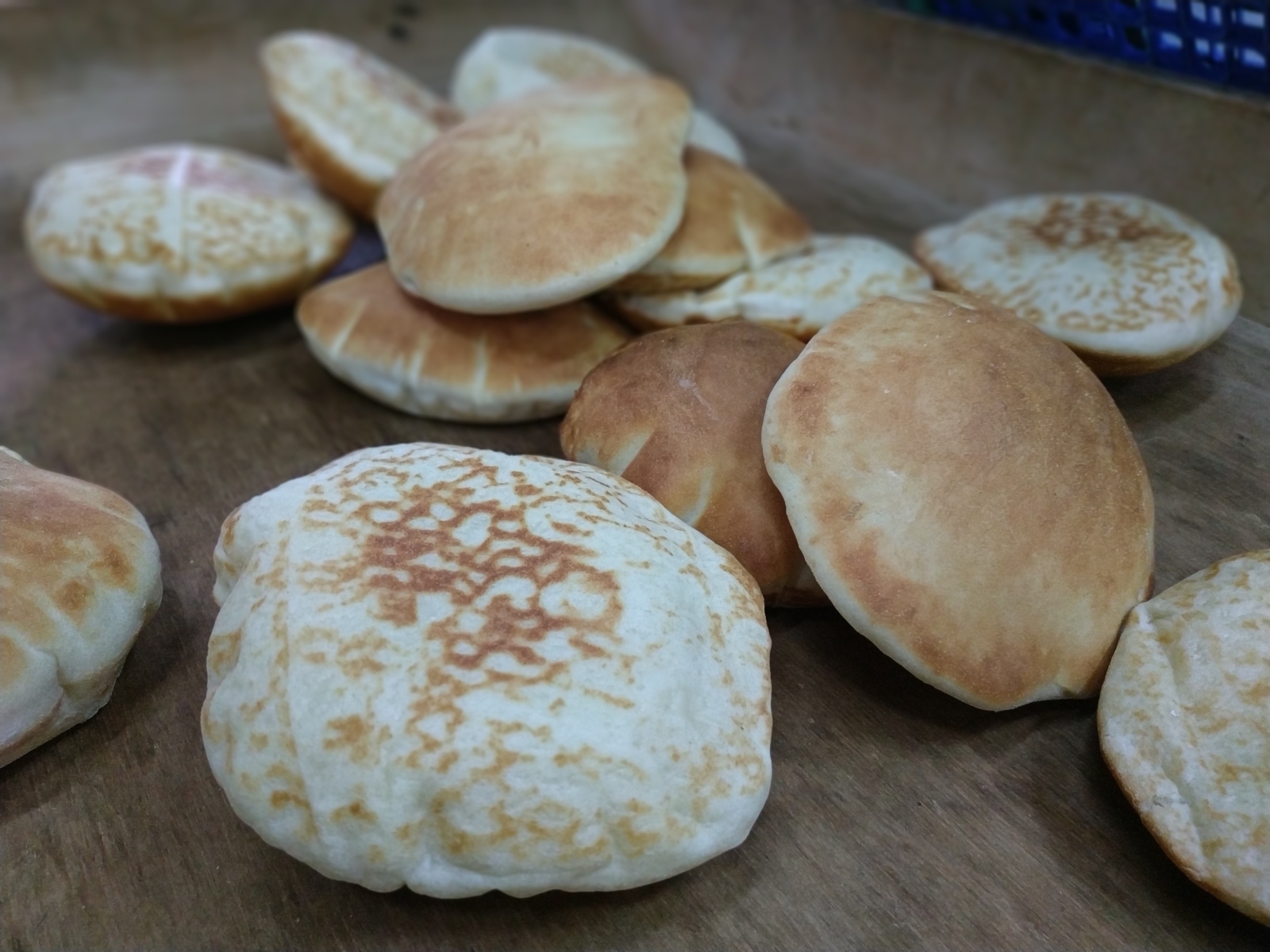 Pita fresh out of the oven at Tabun Ein Mahal bakery, Nazareth. Photo by Jessica Halfin

What to order: Arabic cheese sambusak

A bit farther down this main road (a mere 4-minute walk past stop No. 1) is a casual hummusia that you just cannot leave Nazareth without entering.

The hummus is warm, creamy and unmistakably Galilean in its rustic style, served with fresh small salads, pickles and even fries (chips), shawarma meat and falafel balls, if you desire. It’s best eaten fresh, as is most hummus, but if you’re too full, get a portion to go for later.