Chefs Chen and Alon Koren in their Jerusalem kitchen. Photo by Miriam Alster/FLASH90

It’s not by chance that Israel ranks as one of the healthiest countries – we embrace the Mediterranean diet and grow the superfoods that fuel it.

Hummus, tomato-cucumber salad, extra-virgin olive oil … these and other staple foods on virtually every Israeli table undoubtedly helped propel the country to #1 on a new ranking of countries with the lowest rate of diet-related deaths worldwide and #10 on the 2019 Bloomberg Healthiest Country Index.

Although many Israelis do have some unhealthy eating habits – too much char-grilled meat, processed foods, sweets and deep-fried foods – the overall picture is rosy compared to most countries’ diets and especially the SAD (standard American diet).

And it will likely get even better after the Ministry of Health publishes its newest guidelines for healthful eating emphasizing the traditional “Mediterranean diet” approach that most Israelis already embrace.

That’s our first of 13 reasons you should eat like an Israeli. 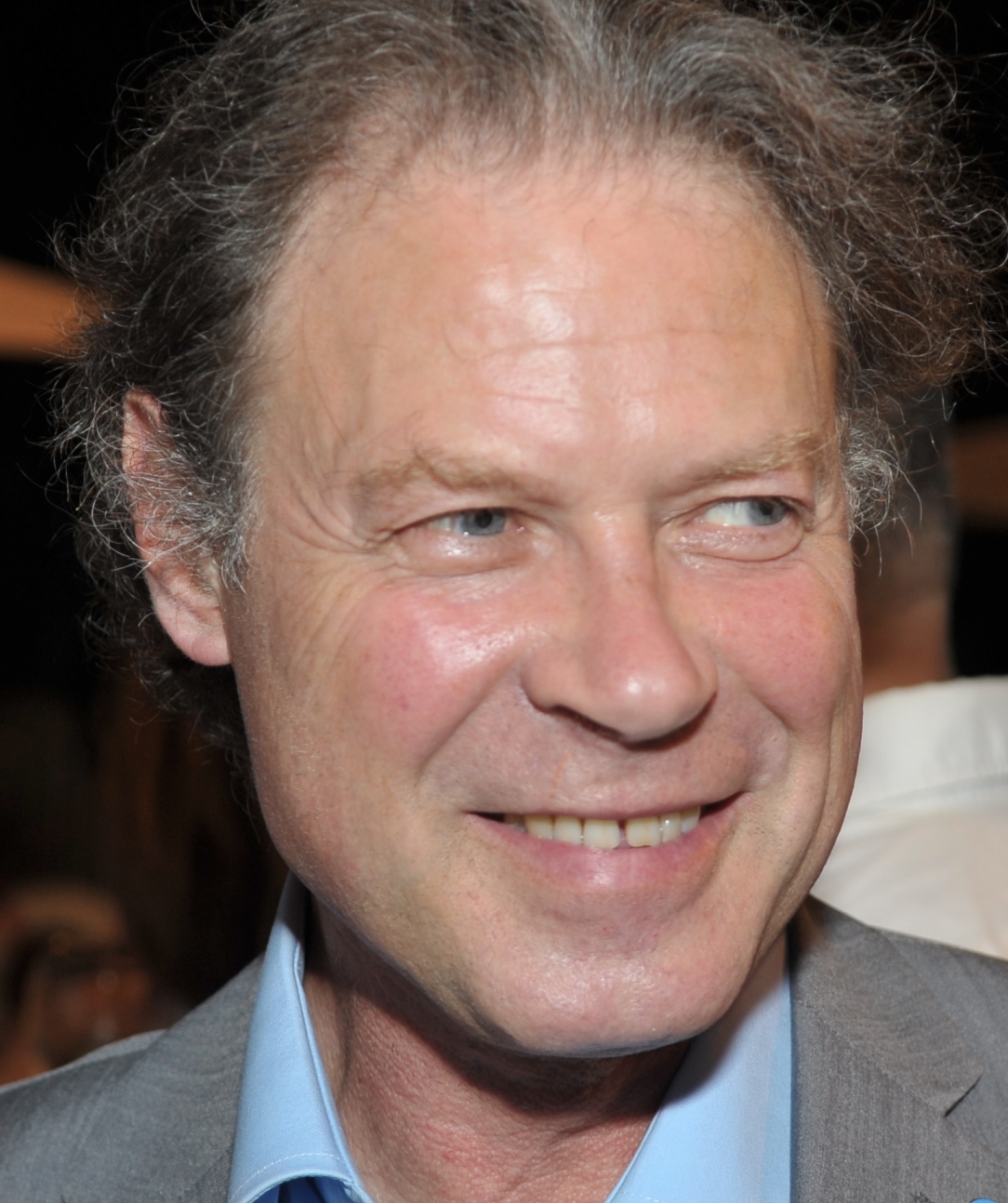 The healthful foundation of Israel’s way of eating is common to all countries bordering the Mediterranean Sea.

“The Mediterranean diet has the most evidence of being the ‘super diet,’ and it’s also sustainable especially if it’s local,” says Dr. Elliot Berry, professor emeritus of human nutrition and metabolism at Hebrew University Hadassah Medical School, and consultant to the United Nations and the Israeli Health Ministry.

The Mediterranean diet encourages moderate amounts of fish and poultry, and low intake of dairy products (mostly yogurt and cheese), red and processed meats, and sweets. It puts a strong focus on the social and cultural aspects of dining, such as communal mealtimes (see #12 below).

Family Friendly Mediterranean-style Cooking: With a Groundbreaking Guide to Weight Loss, Weight Control and Cardiovascular Health, a new book by Israel-based pediatric endocrinologist Dr. Arnold Slyper, promotes what he calls an Israeli Mediterranean diet based on his studies of the metabolism of overweight children in Israel.

2. Salad with breakfast, lunch and dinner

Freshly chopped salad is the cornerstone of all Israeli meals. The most basic Israeli salad starts with locally grown cucumbers and tomatoes dressed with herbs, sea salt, extra-virgin olive oil (the only kind available here) and squeezed lemon juice.

We really pound back those fruits and veggies: According to the Israeli Central Bureau of Statistics, as of the end of 2018, Israel’s 8.9 million residents each have access annually to an average 152 kilograms of fruit and 154 kg of vegetables.

If you’ve ever enjoyed a traditional Israeli breakfast buffet at a hotel or restaurant, you know what we’re talking about.

In addition to a huge variety of raw sliced vegetables and vegetable salads, you’ll find shakshuka (eggs poached in pepper-and-onion-studded tomato sauce), freshly baked breads, a large variety of cheeses, porridge and other warm delights to jumpstart your day. 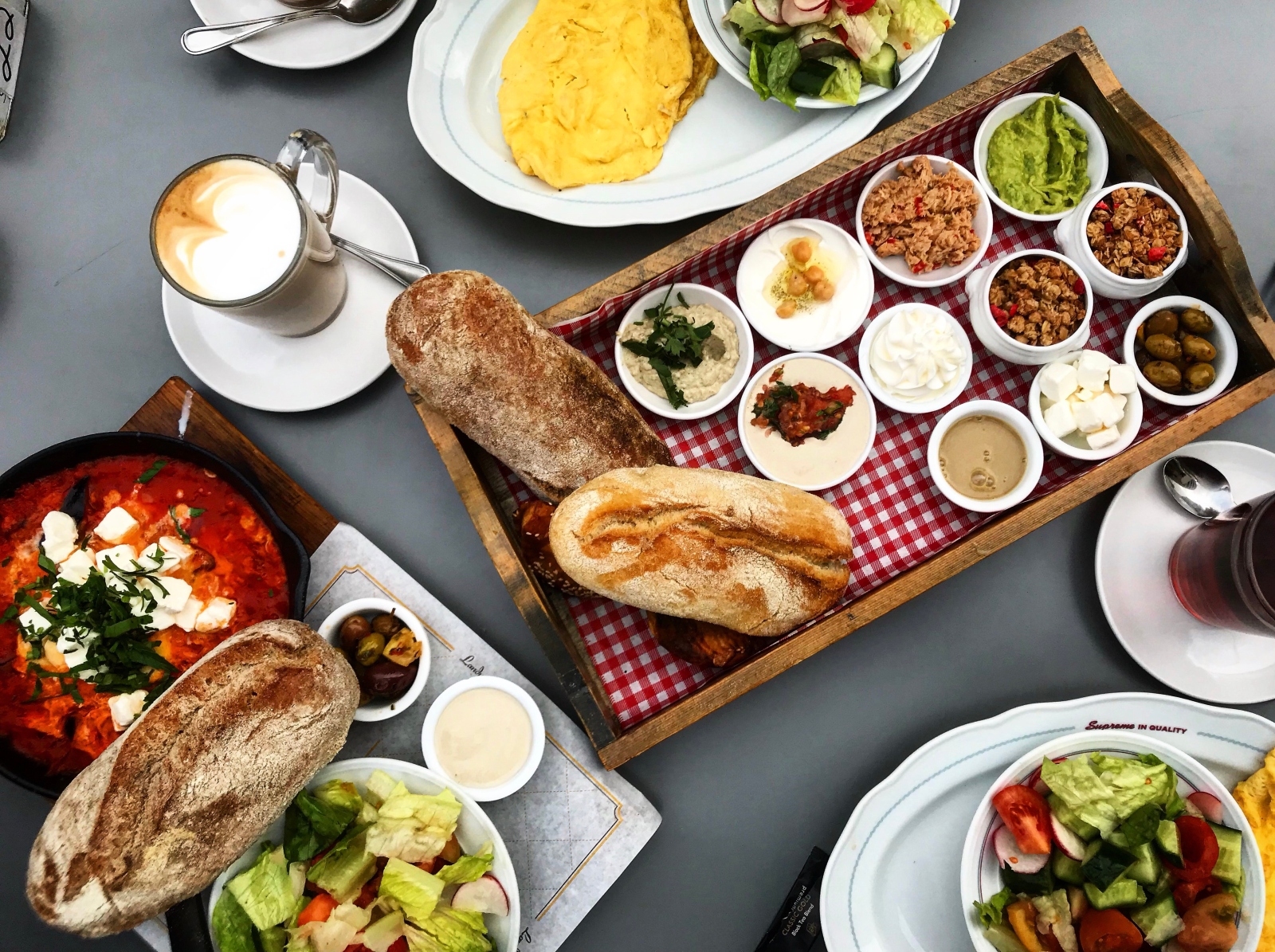 The benefits of a hearty breakfast have been proven in several Israel studies that reveal eating more in the morning and less in the evening suppresses blood-sugar surges, eases weight loss, and helps diabetics avoid insulin resistance. (Just take it easy with the burekas and other high-cal, high-fat goodies on the buffet table.) 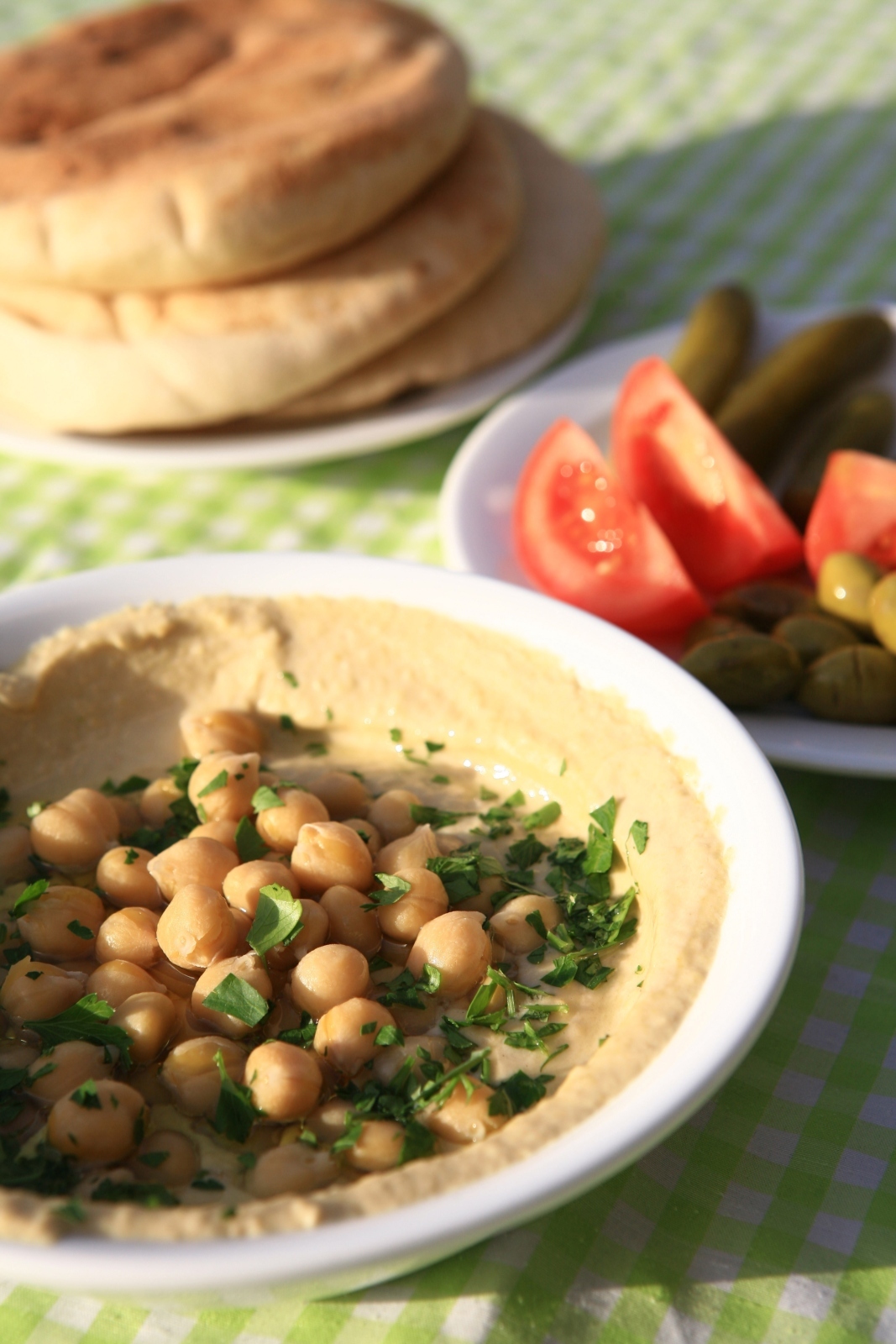 If you don’t see a plate of homemade hummus at mealtime, you’re probably not in Israel.

This delicious and nutritious creamy paste – based on protein-rich chickpeas, sesame tahini, sea salt and lemon juice – is not only for dipping here in Israel.

A large plate of hummus garnished with olive oil and parsley, and often with whole cooked chickpeas, zaatar and extra tahini, is considered a perfectly satisfying meal, scooped up with chunks of warm fluffy pita bread.

You can even find restaurants in Israel that serve nothing but a large variety of hummus and accompaniments. This kind of eatery is called a hummusiya, and we highly recommend checking it out. 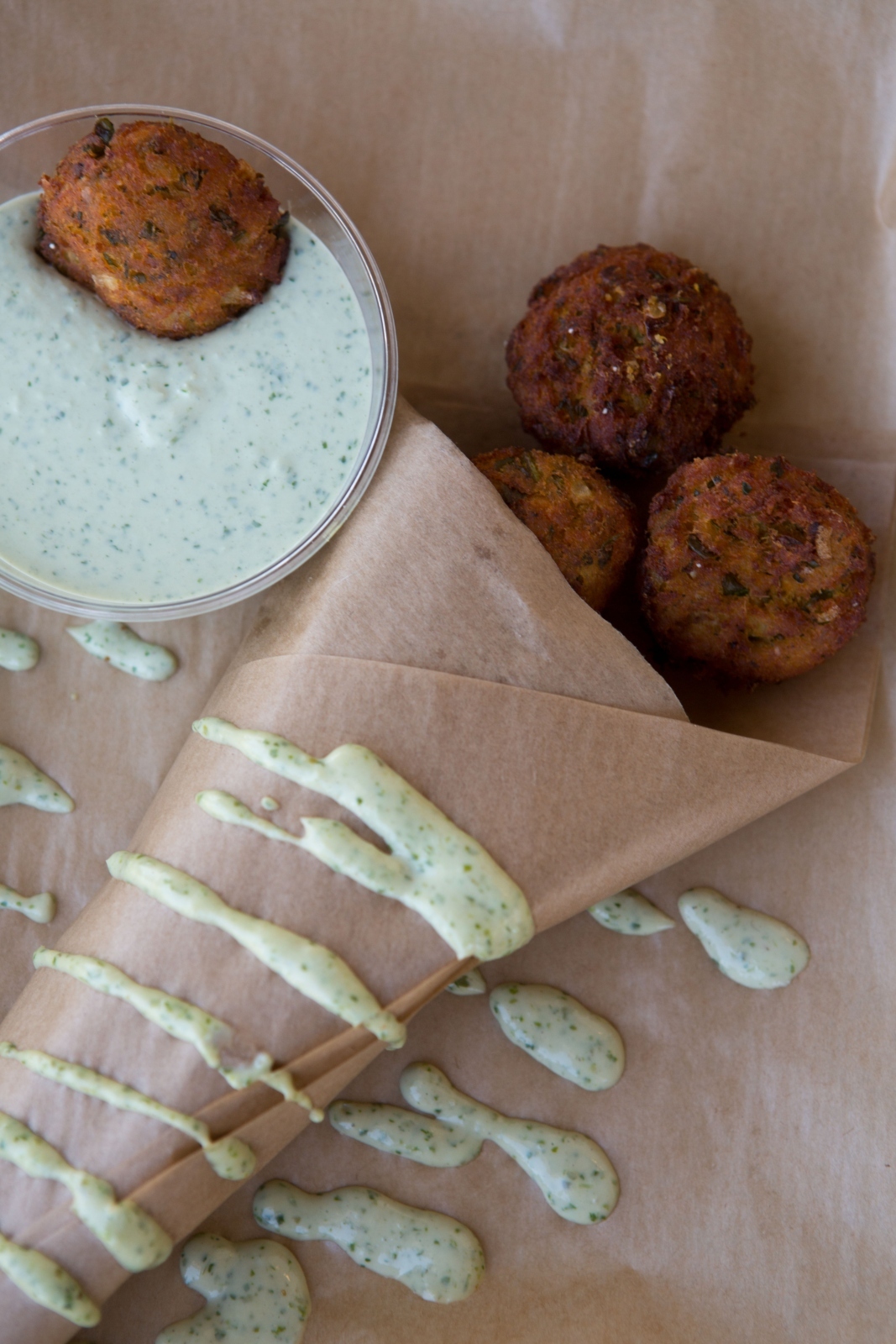 Falafel with tahina served at a restaurant in Jerusalem. Photo by Miriam Alster/FLASH90

Tahini (tahina to Israelis), simply ground sesame seeds, is not only an essential ingredient in hummus but has pride of place in Israeli cuisine as the basis of an all-purpose dip and dressing (think falafel, sabich or whole-roasted eggplant).

The regal red pomegranate is one of the seven indigenous crops mentioned in the Bible (the others are wheat, barley, grapes, olives, figs and dates) and is a visual symbol of Israel itself. 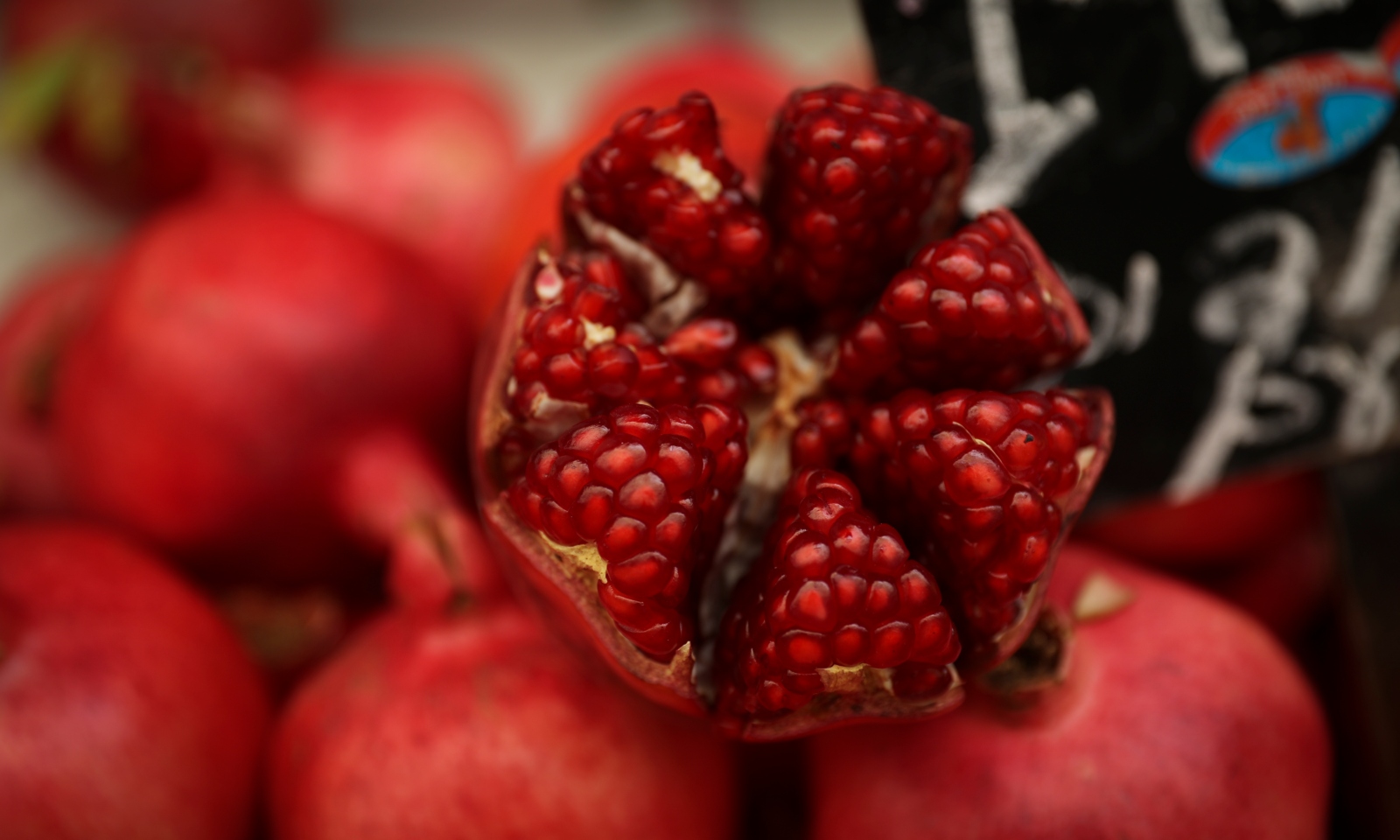 Pomegranates on sale at the Machane Yehuda market in Jerusalem. Photo by Nati Shohat/FLASH90

Pomegranate seeds (the edible part of the fruit) guard against cancer and heart disease, boost immunity and reduce chronic inflammation. Gastric distress, hot flashes, hemorrhoids, conjunctivitis, osteoarthritis, hypertension and high cholesterol are some of the ailments pomegranate seeds are believed to ease.

Because Israeli pomegranates ripen in early fall, they are featured on Rosh Hashana (Jewish New Year) tables for their beauty and their tart flavor. The seeds are used in both vegetable and fruit salads, while pomegranate juice is popular for marinades and beverages. 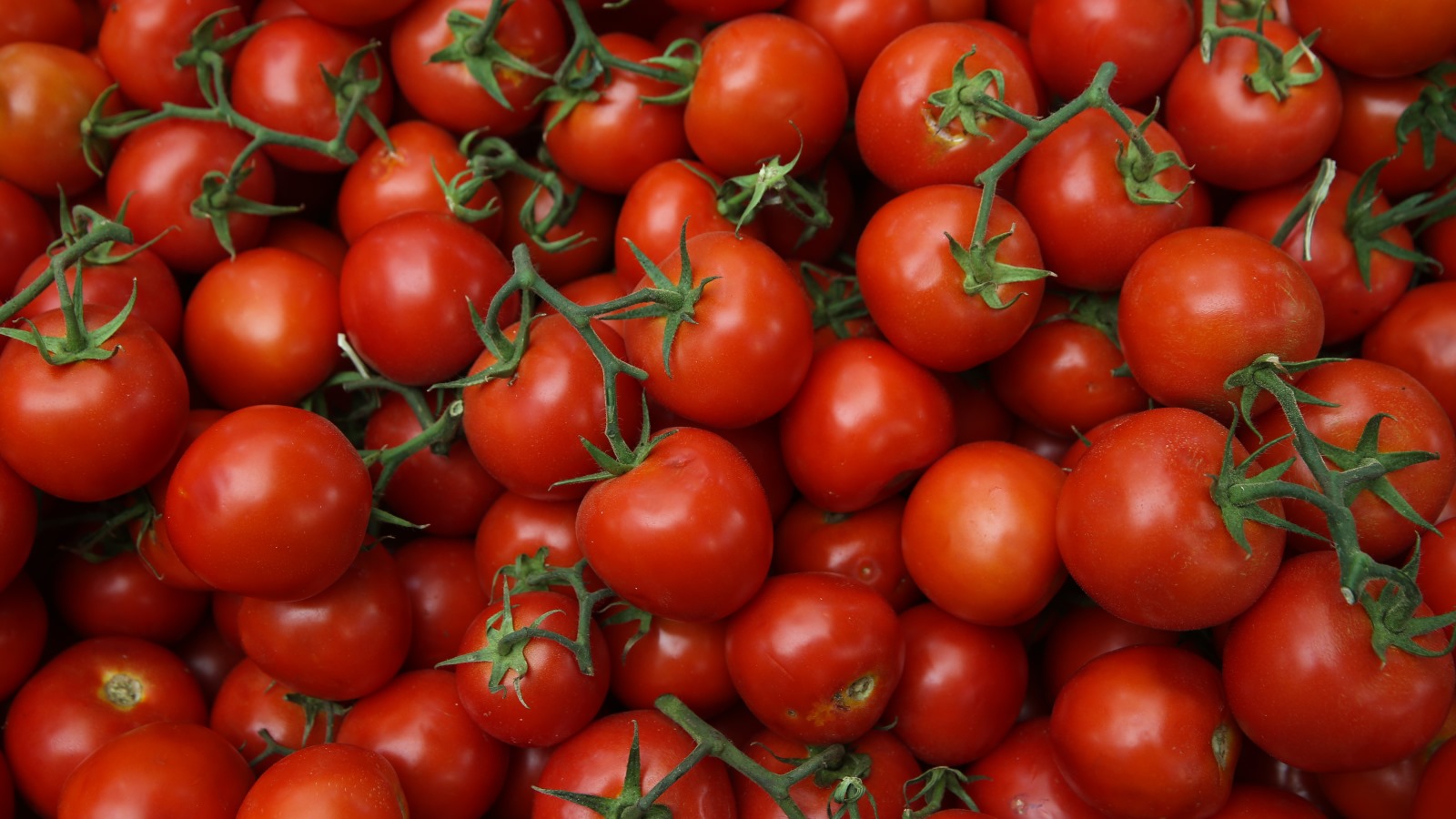 Israelis don’t consider a salad to be a salad if it doesn’t have chopped tomatoes in it.

Israel is a powerhouse in breeding better tomatoes and we grow a lot of them: Some 140,000 tons of tomatoes for fresh consumption each year, and twice that amount for processed foods such as tomato sauce and paste. About 2,000 tons of Israeli tomatoes and cherry tomatoes are exported annually.

Along with vitamins and minerals, tomatoes contain lycopene, the carotenoid phytonutrient that makes them red. Lycopene is a powerful antioxidant beneficial for the heart, blood pressure, prostate, bones and skin. Our bodies absorb lycopene best when tomatoes are consumed with something oily like olive oil or cheese. 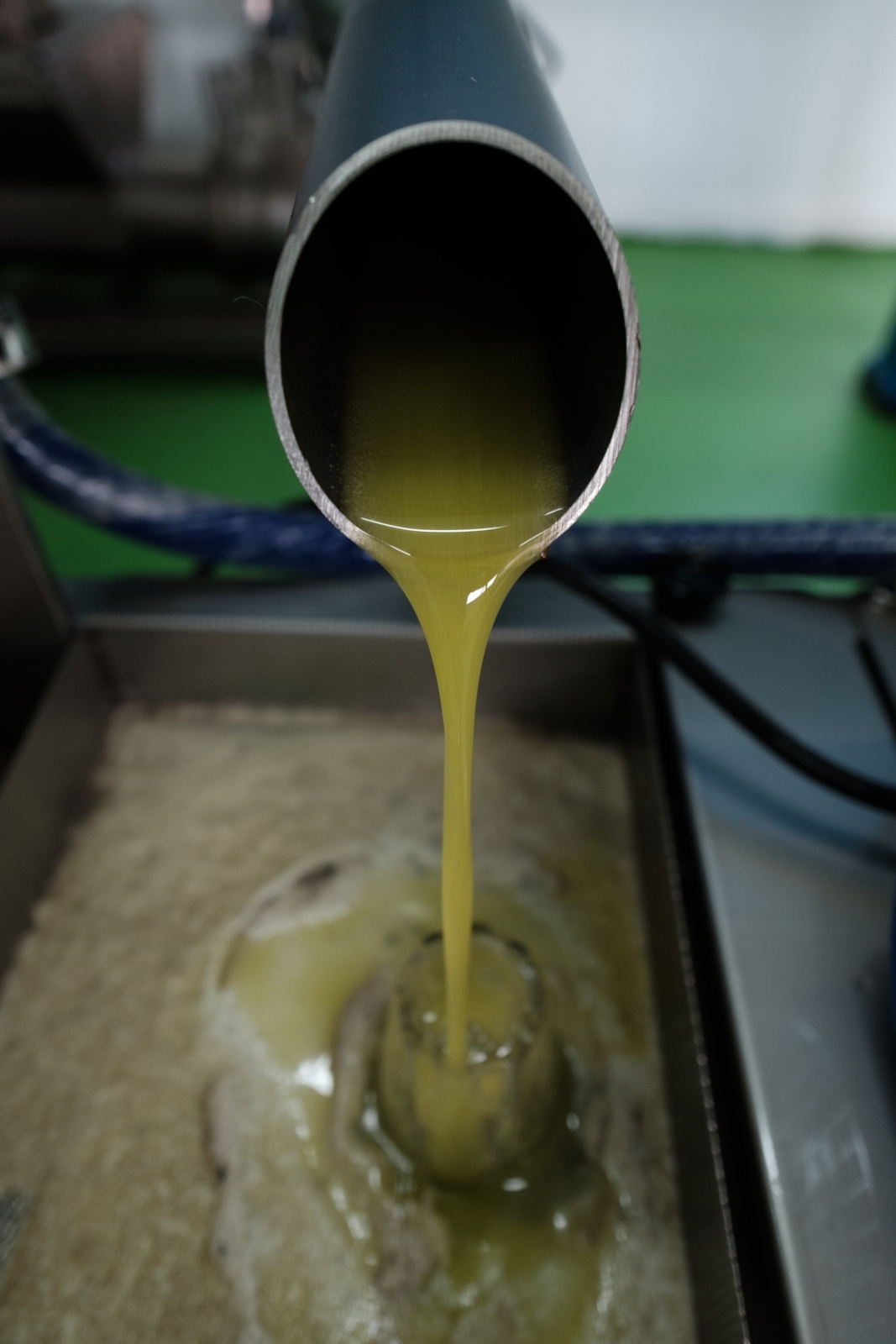 Extra-virgin olive oil ready to be bottled at the Carma farm in Israel. Photo by Yaniv Nadav/FLASH90

Unrefined extra-virgin olive oil is the foundation of the Mediterranean diet, and hence in Israeli cooking.

Often considered a fountain of youth, EVOO is a rich source of healthful monounsaturated fat, antioxidants, vitamins and minerals. (“Virgin” means it comes from the first pressing, while “extra” signifies low acidity, both critical factors in a high-quality oil.)

In Israel, Leccino, Coratina, Koroneiki, Souri and other varieties are grown and bottled by both large and boutique brands, many of which regularly win national and international awards. Every year, between 15,000 and 16,000 tons of EVOO is produced in Israel. 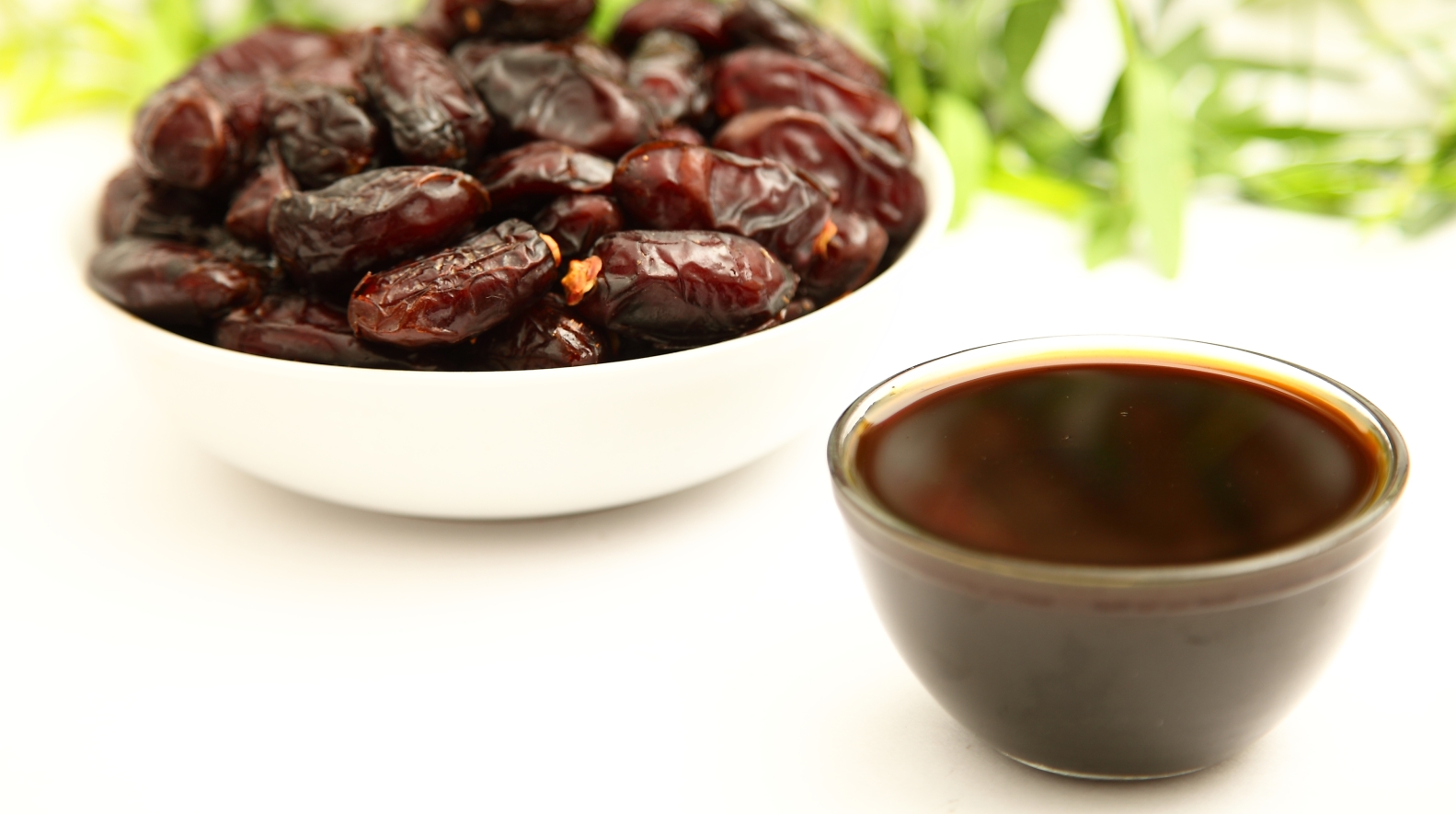 We pop ’em like candies, stuff ’em with walnuts and use their silan (nectar)  as a low-glycemic honey, straight up and in an endless assortment of stews, sauces, rubs and marinades.

Israelis love locally grown dates and this superfruit loves us back: dates protect against heart attack and stroke by lowering blood triglyceride levels; stabilizing blood pressure; and providing a good dose of antioxidants, vitamins A and B, protein and dietary fiber.

Eaten mainly in dried form, dates are truly “all natural” because, unlike other dried fruit, dates do not need to be preserved with potassium sorbate or sulfur dioxide. Their high sugar content preserves them naturally. 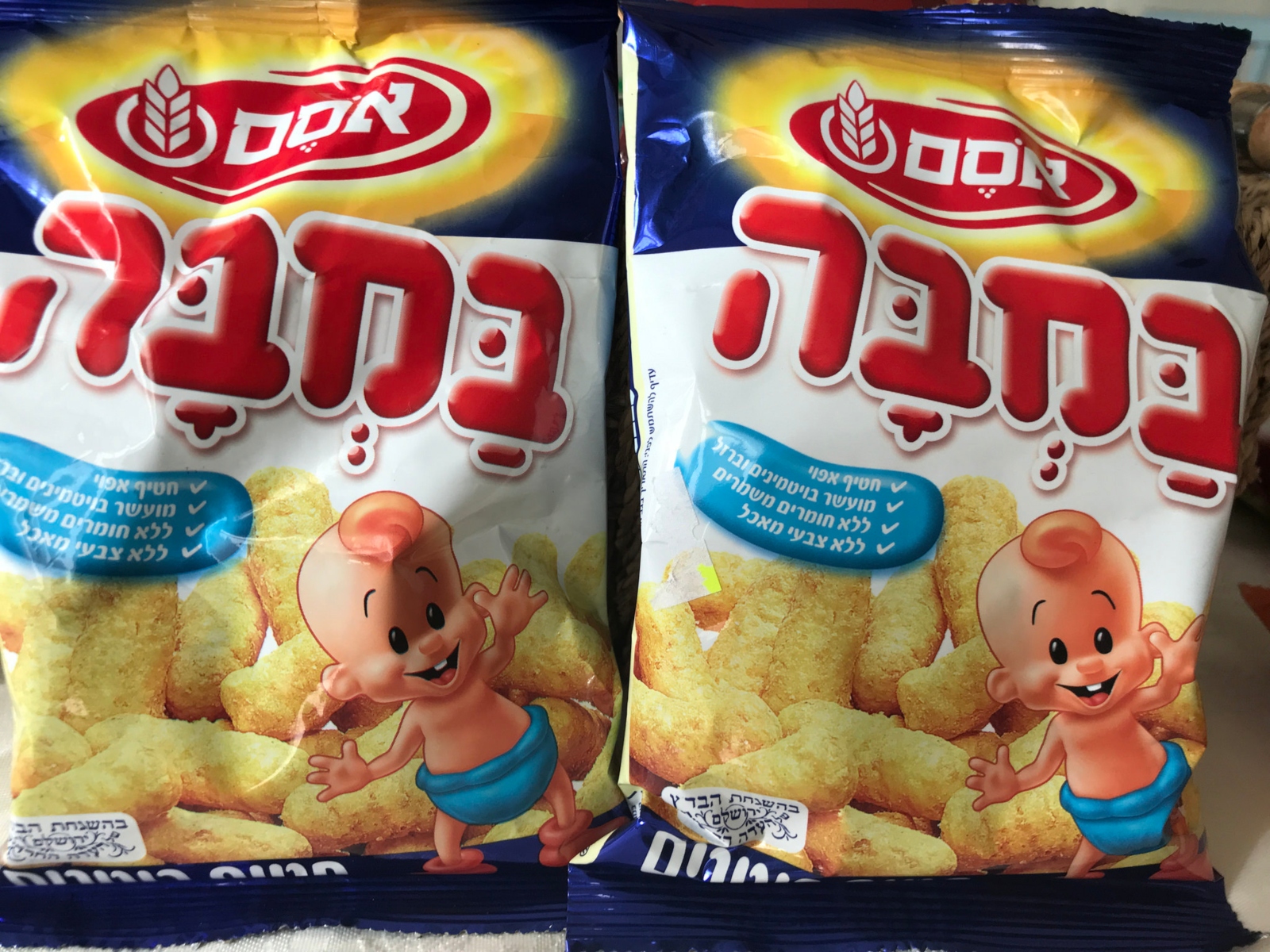 We cannot deny that Bamba, Israel’s favorite packaged snack, is a processed food. But it belongs on this list because scientific studies have shown that the peanutty snack plays a key part in keeping Israeli children free of the peanut allergies that plague their peers in the West.

Bamba contains 50% peanuts and is fortified with vitamins and minerals including folic acid and iron. And now you can buy this crunchy treat at major American retailers including Walmart.

In American supermarkets, you can find just about any kind of fruit or vegetable any time of the year because whatever is not in season is imported.

In Israel, much of the produce appears according to the local season – and while that may mean forgoing strawberries in summer and peaches in winter, it’s quite exciting when those items come to market ripe and fresh.

“Seasonality is very important,” says Berry. “Going to local markets for fruits and vegetables in season is just lovely.” 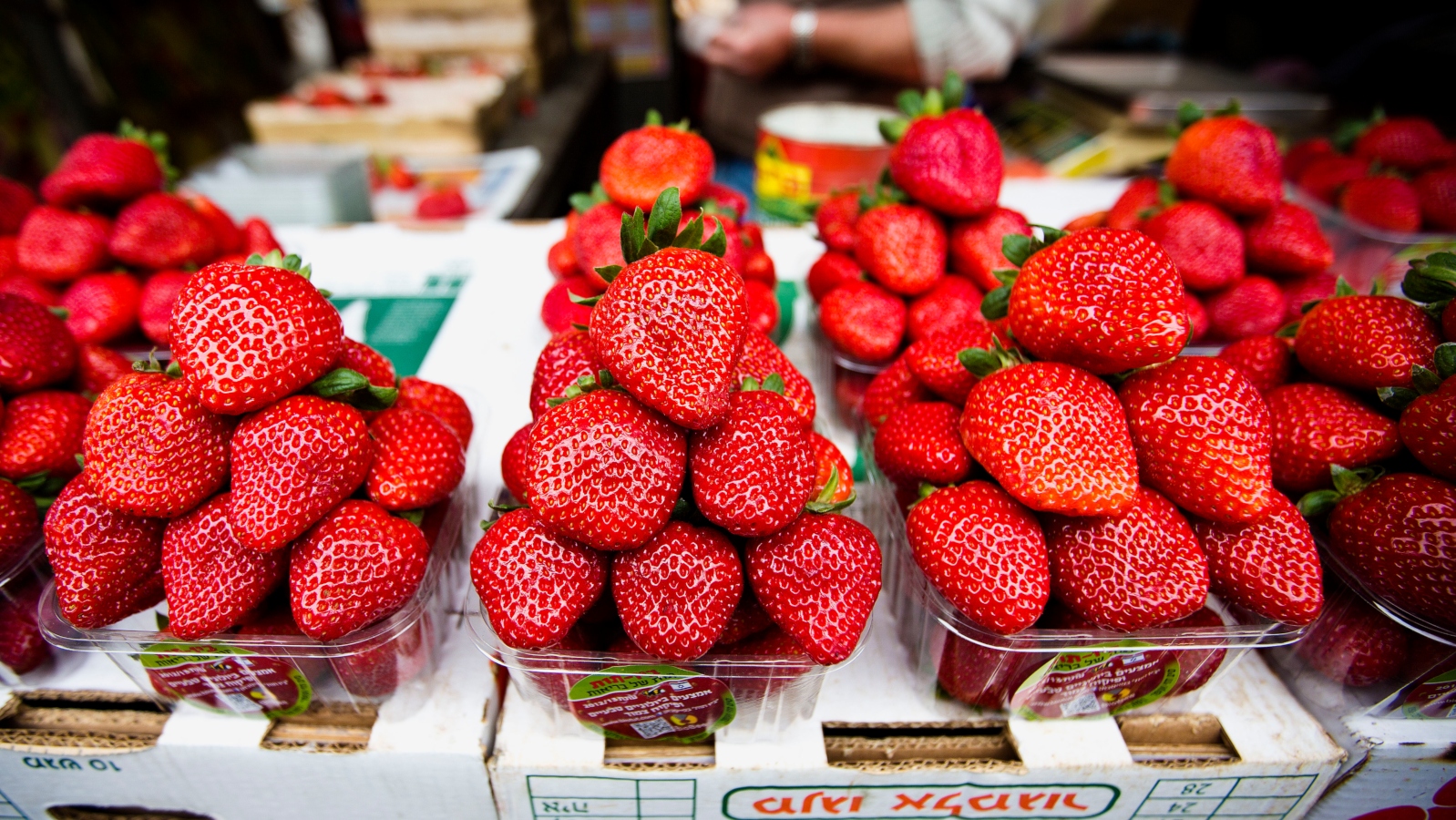 Strawberries for sale at Carnel Market in Tel Aviv in November. Photo by Moshe Shai/FLASH90

Nutritionists agree that produce retains more nutrients and flavor when it’s picked at the peak of freshness and quickly brought to market, rather than picked early and left to ripen on a long truck or boat journey.

Local seasonal produce needs less human intervention (such as pesticides and coatings) and less fuel to get to consumers, and is generally much cheaper. 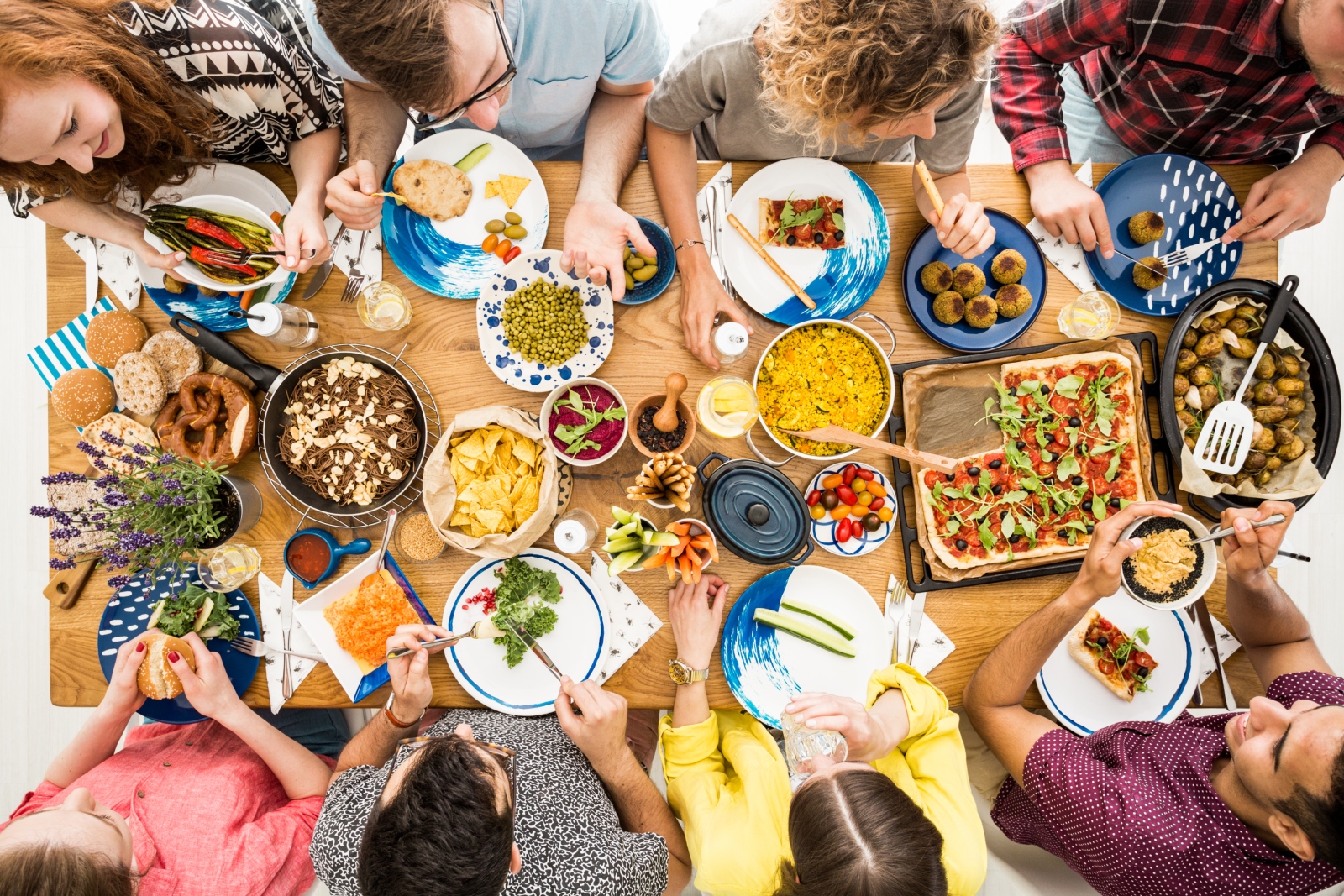 “The social aspect of eating is very important to health,” says Berry. “Communal meals are relaxed and convivial. Adults should involve the children, teaching them to make sensible choices within the Mediterranean framework, and showing them how to cook and cut salads.”

The Israeli lifestyle checks all those boxes. Large Shabbat dinners on Friday nights are held sacred even in the least religious of Jewish families, and it goes without saying that Passover seders, Rosh Hashana dinners and Yom Ha’atzmaut barbecues require hosts to borrow extra folding chairs to accommodate all the guests. Arab Israelis, too, are well known for serving bountiful communal meals to family, friends and newcomers alike.

Israel reportedly has the highest number of vegetarians and vegans per capita of any other country, and the latest research indicates this plant-based trend contributes to the country’s overall good health.

Consuming more fruits, veggies and whole grains, but less meat, is one of four factors (along with not smoking, staying lean and exercising 30 minutes daily) that “may help prevent — and in some cases even help treat or reverse — every single one of our fifteen leading causes of death, including high blood pressure, heart disease, diabetes, and more,” according to the Evidence-Based Eating Guide by American bestselling physician/author/speaker Dr. Michael Greger (How Not to Die).

Click here for our guide to the best vegan restaurants in Israel.