The Spirit(s) Of The Midwest

Craft spirits — those from distilleries that annually produce less than 750,000 gallons (i.e., 150,000 bottles) — is one of the fasting-growing segments of the spirits industry. While today accounting for just under 4 percent of U.S. spirits sales, that number has more than doubled in the last five years. Just as the market share has grown, so has the number of craft distilleries; 15 years ago there were only 50 operating in the U.S. while today there are nearly 2000 (with 123 operating in New York State alone). A small but growing number of craft distilleries now have kosher supervision. Foremost of them is Chicago’s Koval distillery.

Founded in 2008, Koval (Yiddish for blacksmith) is run by the husband-and-wife team of Robert and Sonat Birnecker. As Sonat explains, neither of them started their careers as distillers: “I was a Jewish studies professor at Baltimore Hebrew University … [and] after earning his Ph.D., Robert became the deputy press secretary for the Austrian Embassy in D.C.” While looking to buy a house and settle down in the Washington area, they started to question their life goals, and “it became clear to us that we would rather be close to family, work together and live in a city we loved — Chicago — than remain in D.C. So, instead of buying a home, we bought a still, moved in with my parents with our new baby, and invested all of our time, money and energy to starting the first distillery in Chicago since the mid-1800s.”

All of Koval’s products “begin with organic grains sourced from a Midwestern organic co-op,” says Sonat Birnecker, who founded the distillery with her husband Robert. Photos courtesy of Koval Distilleries

In 2008 the craft distillery movement was just starting to pick up steam. “When we started, we did so with around $30,000 and some help from Visa, Mastercard and American Express. Today, it is very difficult to get into this business without a very large investment or investors,” says Sonat.

Today, Koval is in the process of becoming one of the largest independent craft distillers. “Currently, we run a 5,000-liter Kothe [brand] still,” says Robert. “In May of 2019, a second 5,000-liter Kothe still will be added to our setup. Both stills combined will have a production volume of roughly 500 gallons of high-proof alcohol daily.”

The distillery’s original focus was whiskey, but it has expanded its portfolio, and now offers an array of gins, brandies, eau de vies and liqueurs. “Our focus is definitely still very much on our whiskeys,” says Robert. “However, the gin line has picked up quite a bit. Being independent allows us to continue to experiment quite a bit with liqueurs, brandies and many other spirits, while still staying true to our main whiskey and gin products.”

From its founding, Koval has been certified kosher by the Orthodox Union, which is still a rarity at craft distilleries. “Aside from not wanting to exclude a number of our friends,” says Robert, “kosher also is a sign of quality for us. We get inspected four times a year and like being as transparent as possible with our customers.” 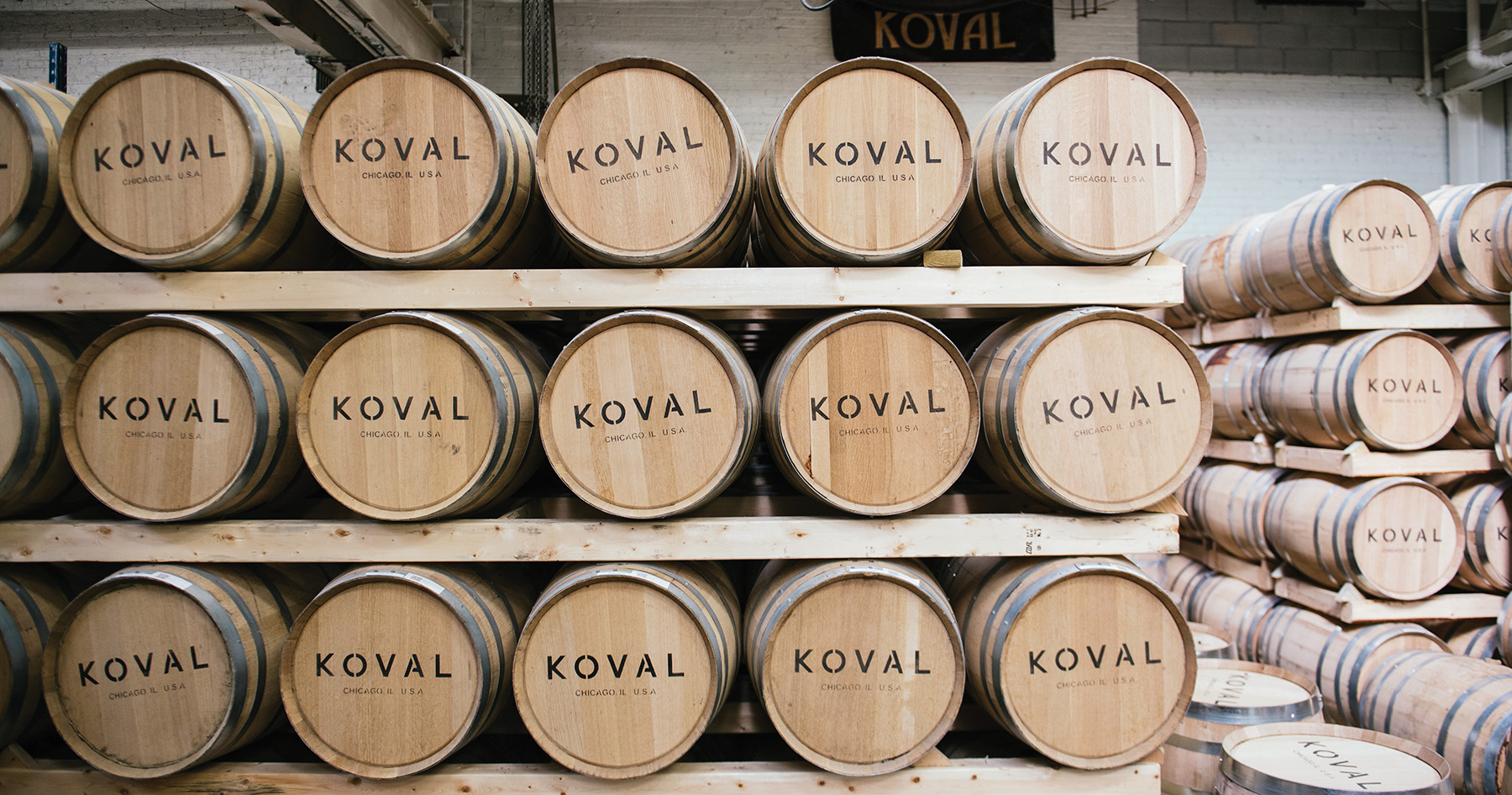 “We did not want to exclude anyone from a good l’chaim,” explains Sonat, “but so much of what we do at Koval is based on Jewish values. We believe very strongly in tzedakah [charity], and to teaching the importance of giving back to our children, so we give to at least 365 charitable organizations a year. We also appreciate that our business follows a Jewish rhythm. For instance, not working with grain on Passover makes sense for us as Jews.”

Like many craft distilleries, Koval emphasizes its use of locally- and regionally-sourced produce in all of its spirits. “We are a distillery focused on a grain-to-bottle approach and heart-cut distillates [“heart-cut” refers to the highest-quality portion of what comes off the still] regardless of what we’re making,” says Sonat. “All of our products begin with organic grains sourced from a Midwestern organic co-op, and we make them all from scratch, each barrel or bottle traceable to the field on which the grain was grown.”

Likewise, much of their customer base comes from Chicago. “We love Chicago and have ‘Made in Chicago’ on every bottle that we produce,” says Sonat. Initially, though, cultivating the local customer base presented some legal hurdles. “Early on, I spent a lot of time trying to address the legal climate for distilleries in Illinois; most importantly, establishing a Craft Distillers License that allowed for a tasting room and retail store on site at the distillery.” 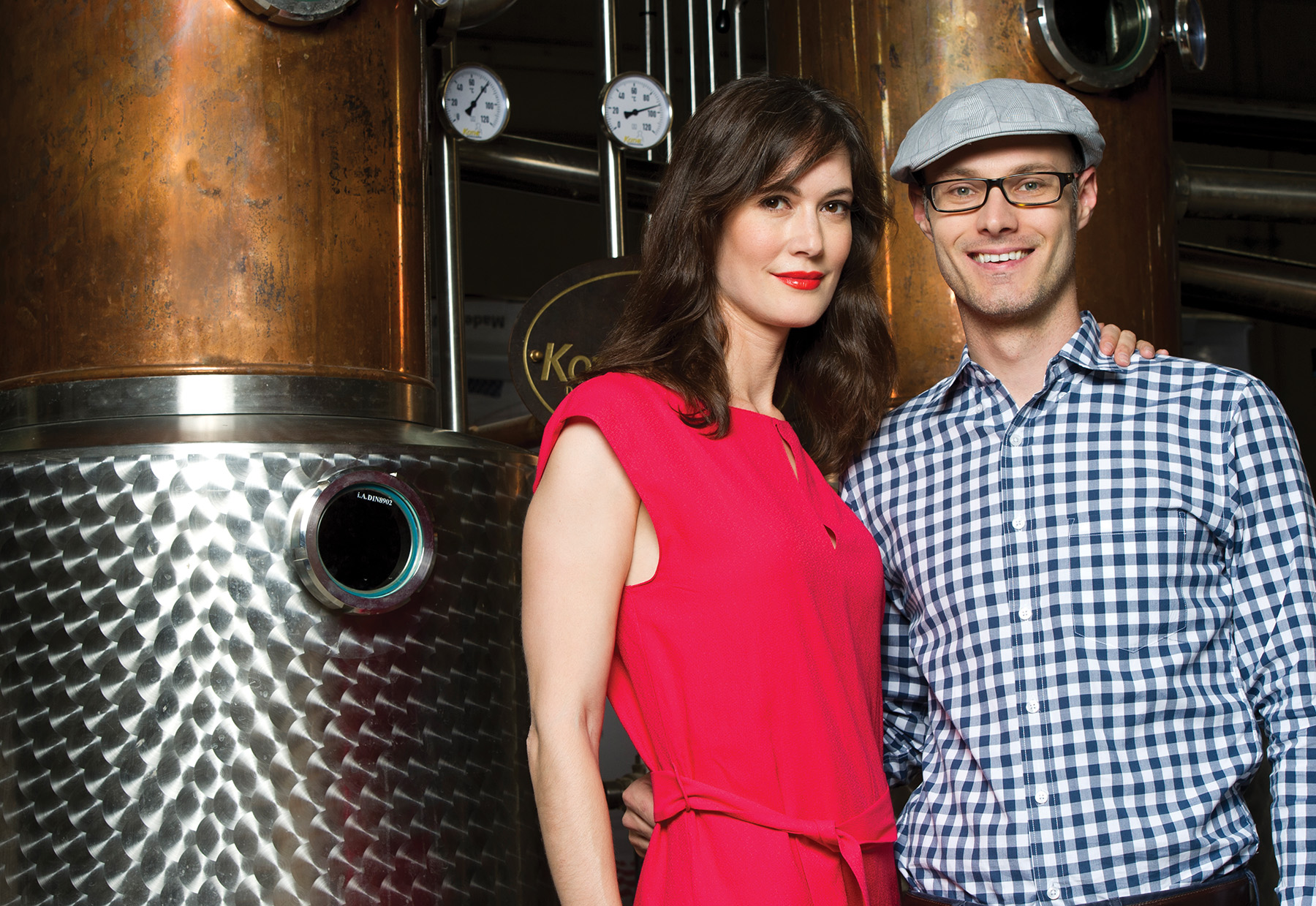 Sonat and Robert Birnecker founded and run Koval. “So much of what we do at Koval is based on Jewish values,” says Sonat. Her husband adds that “kosher is a sign of quality for us.”

Today, though, Koval is becoming more of a national and international brand. “We are the only completely independent craft distillery in the U.S. with distribution in over 55 export markets,” says Sonat. “About 60 percent of our sales are domestic and 30 percent international, with Europe and Japan leading our exports.”

In addition to running Koval, the Birneckers also help to train the next wave of craft distillers. “Through our consulting business with Kothe Distilling Technologies, we have provided equipment to almost 200 different distilleries; most of them are in the U.S. and Canada. However, we have also had interesting setups all over the world, such as a rum distillery in Uganda,” says Robert. “We also teach three-day and five-day workshops on distilling, where we have hosted over 3,500 students throughout the last 10 years. It is really exciting to see how these students and distilleries have developed over time. We are glad and very proud that we’ve had the ability to impact the industry in a positive way.”

Below are tasting notes for a few of Koval’s current releases. Please note that none of these spirits are kosher for Passover.

Koval Single Barrel Bourbon, 47 percent abv: Made from a blend of 51 percent corn and 49 percent millet, and aged for under four years, this caramel-colored whiskey has a sweet and tangy nose of corn and honey, with a strong cereal note and a hint of malt balls. The flavor is sweet, with corn caramel and honey all playing at the front of the palate, moving towards flavors of vanilla and spice at the back of the palate. While nice as a sipping whiskey, it would be better as a choice for cocktails; it makes a nice Manhattan.

Koval Single Barrel Rye Whiskey, 40 percent abv: This caramel-colored whiskey is made from 100 percent rye and is aged between two and four years. The lively nose is dominated by rye spice and gingerbread, with notes of toffee and cinnamon, and just a hint of menthol. Look for flavors of rye spice, caramel, toffee and butter cake, with hints of mint and chocolate. Well-balanced, this rye is good for both sipping and cocktails; it makes a very good Old Fashioned.

Koval Dry Gin, 47 percent abv: Made from a base of unaged rye whiskey, this delightful gin has a big bouquet of juniper citrus and anise. Look for flavors of grapefruit and juniper at the front of the palate, a spicy mid-palate, and licorice root and fennel on the finish. Well-balanced, this gin is a good choice for citrus-based cocktails; it makes a nice Aviation.

Koval Cranberry Gin Liqueur, 30 percent abv: This tart and refreshing cranberry-colored liqueur is made by macerating cranberries in Koval’s dry gin, and then adding sugar. Think of this as the American cousin of England’s Sloe Gin. Look for the flavor and aroma of cranberries playing against juniper, citrus, angelica and star anise. With its tart flavor and lighter viscosity, this liqueur is enjoyable on its own, particularly when served over ice, but would also be good in cocktails; try it as a substitute for Sloe Gin in cocktail recipes.

Please Note: Spirits are scored on an ‘A’-‘F’ scale where ‘A’ is excellent, ‘B’ is good, ‘C’ is flawed, ‘D’ is very flawed, and ‘F’ is undrinkable. Prices listed reflect the price at the retailer mentioned.