Ice cream on display at a shop in Rishon LeZion, Israel. Photo by Victoria Shapiro/Shutterstock.com

Bamba, arak, watermelon and Bulgarian cheese, labane and zaatar – this summer’s ice creams are coming in some very surprising flavors!

Everyone knows that pedestrian ice cream and gelato flavors are passé in 2018. At a time when “local” and “seasonal” are the buzzwords, we’re totally in love with the new uniquely Israeli flavors showing up in the country’s ice-cream shops.

Whether you prefer your ice cream on a spoon or in a cone, you’ll want to make the rounds to try these delicious out-of-the-box flavors this summer, once the weather turns unbearably hot and the cool treat is more a lifeline than just a dessert. 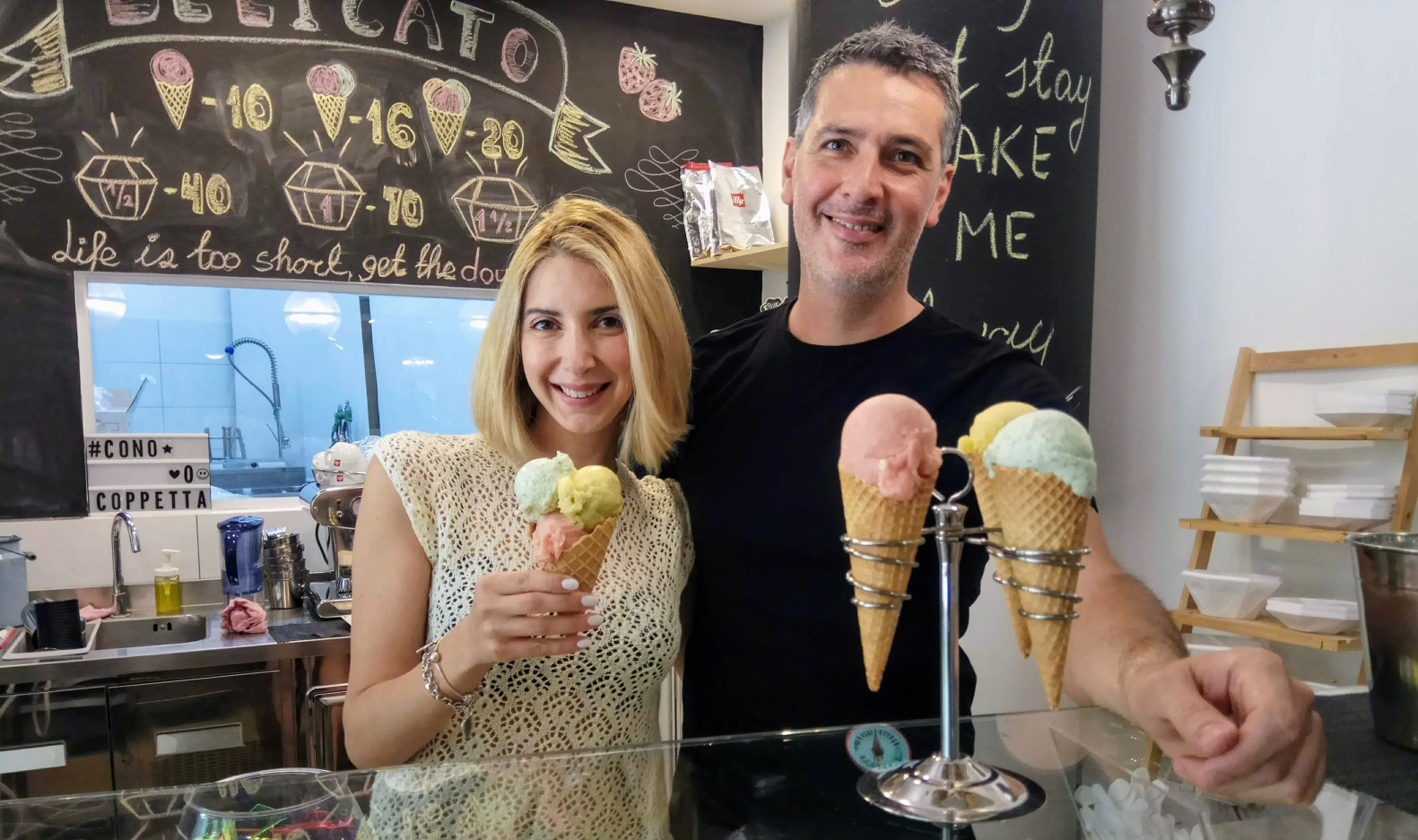 Reminding us of a blistering summer day at the Mediterranean beach, Bulgarian cheese — a feta-like Israeli staple — and sweet watermelon come together in one refreshing gelato made by Italian transplant and food fanatic Mario Santomo of Gelato Delicato on the beach adjacent Castra Mall in Haifa.

Although the cheese-and-watermelon variety gets our vote for most original, all the flavors we tried, from fresh melon sorbet to their perfect pistachio, were outstandingly delicious. Even their other creative flavors such as orange with olive oil and black salt, challah bread with butter, and the very Mediterranean basil and mozzarella, were binge-worthy. Who knew that ingredients for a pizza could make such a tasty dessert?

Known for their outrageous flavors — such as caramelized roses and avocado cream — Arte Glideria is at the top of the ice cream game in sunny Tel Aviv.

Located next to the Carmel Market on Nachalat Binyamin Street, Arte Glideria offers specialty flavors such as lemon cardamom and fennel. But if you really want to feel like a local you’ll go for the olive oil and caramelized cherry tomatoes variety. After all, Israelis wouldn’t dream of making anything without olive oil (at least we wouldn’t), and if it weren’t for the prickly cactus pear, cherry tomatoes would surely be our national fruit. 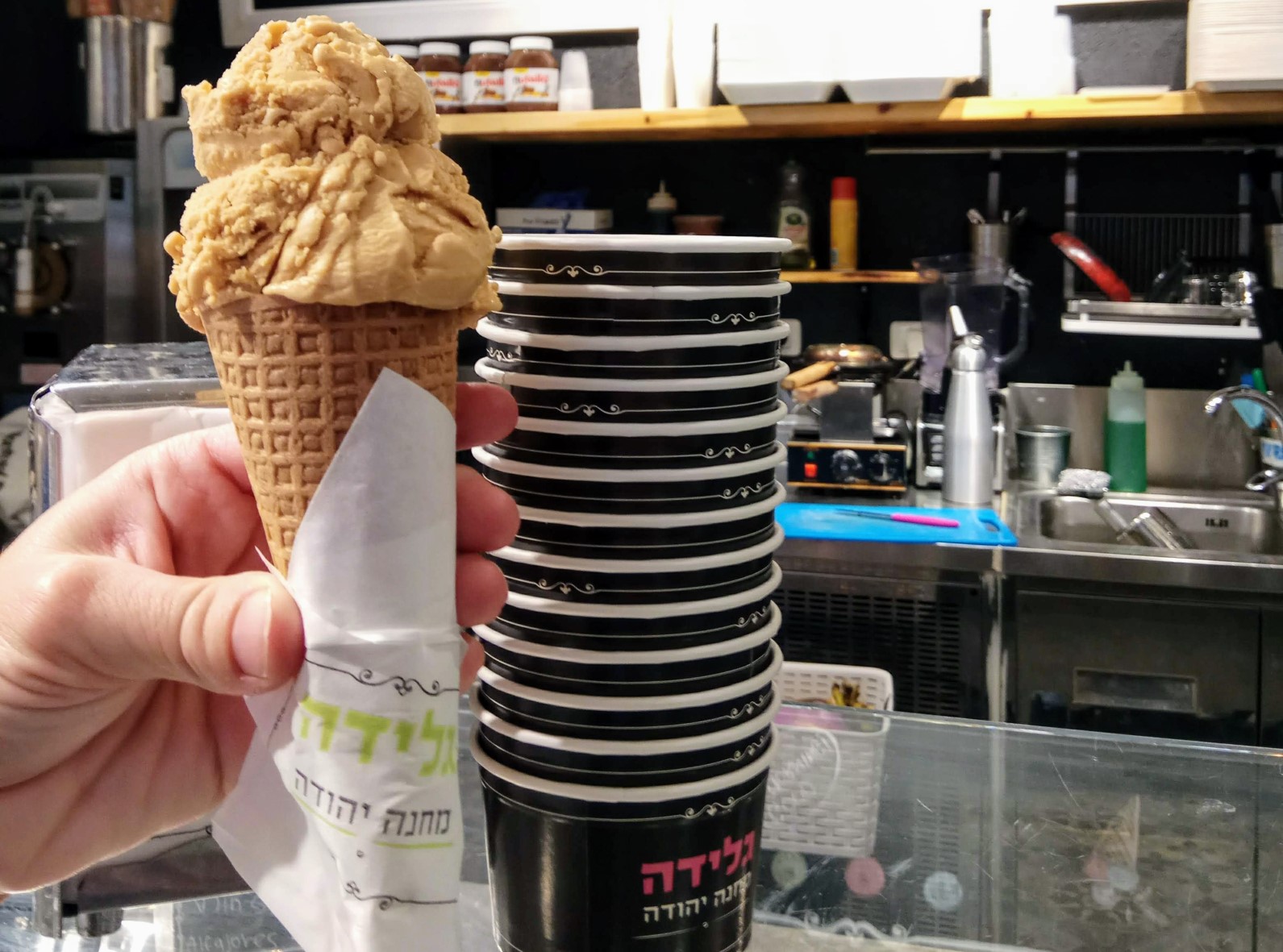 What’s inside, you may ask? That would be anything from dark brown candied “Chinese pecans,” a market staple, to beloved Alfajores cookies — that is, butter cookies, caramel and coconut blended together into one smooth ice cream. 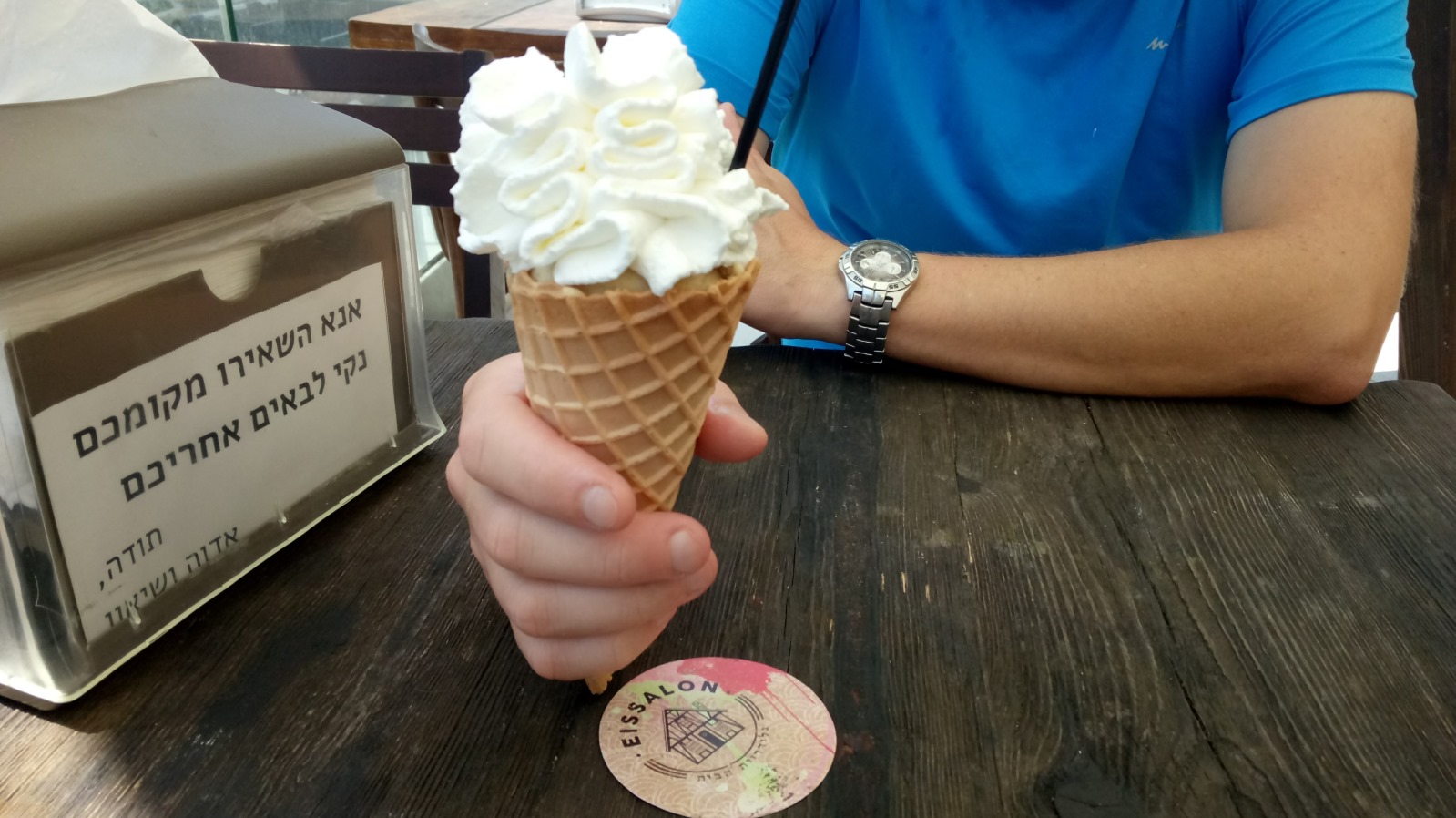 Enjoying a cone at Eissalon, Haifa. Photo by Jessica Halfin

Bringing German flair to Haifa’s upper hills, Eissalon is one of the only locations in Haifa where you can get ice cream at the artisanal level.

With rotating specialty and seasonal flavors, our current favs are labane, zaatar and pita ice cream — a nod to the specialty food of the nearby Druze villages; turmeric ice cream, which must be tasted to be believed; and beer-flavored ice cream that tastes just like a half liter in your favorite neighborhood pub. 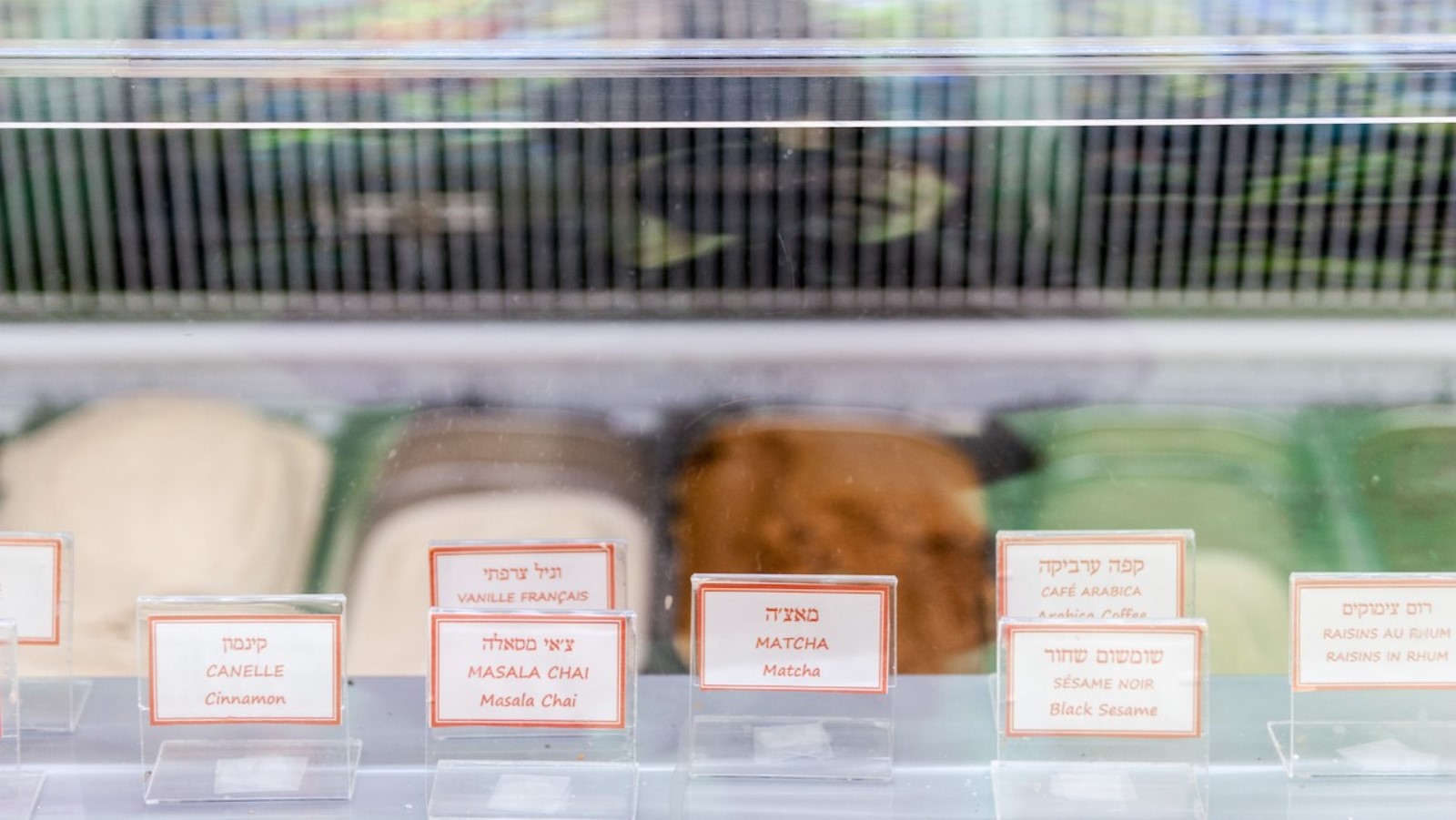 Making French-style ice cream in Israel’s capital city, Mousseline makes sure to use the freshest seasonal produce, brought in by nearby specialty farms. But it’s not always all about the produce. Their most popular flavor, Coffee Arabica, is as scrumptious as it is caffeinated.

Embracing exotic flavors as well, such as trendy black sesame, green tea and wasabi, Mousseline will blow you away this summer with the pure refreshing flavor of their pineapple sorbet, because — fun fact — Israel grows its own pineapples.

It just wouldn’t be right to visit Israel and not gorge yourself on all things sesame, including sweet delicious sesame candy, a.k.a. halva.

If you’re looking for the ultimate Tel Aviv experience, then you’ll want to also enjoy all the vegan options the city has to offer. Serving the best of both worlds — dairy and non-dairy — Anita makes authentic Italian-style small-batch ice creams.

If halva isn’t your cup of tea, try non-dairy Oreo cookies or dragon fruit sorbet. If those don’t float your boat, then you can always try any other of the 150 flavors, such as salted bagel or Loaker hazelnut wafer cookies.

Israelis generally abhor peanut butter. But if it’s in the form of a puffy corn-based snack (Bamba), they can’t get enough of it! In fact, Israelis eat so much of the stuff from such an early age, that they have the lowest incidence of peanut allergies in the world. So it was only a matter of time before someone made it into an ice cream flavor.

Visit Leggenda parlors and you’ll have the pleasure of partaking in this most Israeli of flavors. And you won’t want to stop there: Check out the Kibbutz Yotvata Park outside of Eilat for ice creams made from the dairy’s milk, including Red Bamba honoring the peanut butter snack’s bright pink, cereal-like sweet sister.

Go to the bar in Tel Aviv on a hot summer night, and you’d expect to imbibe some licoricey arak liquor, sure, but at an ice cream shop in the Old city of Acre (Akko), it makes for quite the unexpected, but also very Israeli, treat.

Representing the exclusive Giuso Italian ice cream brand in Israel, Golda ice cream is anything but what you would expect from a chain glideria. Like others on this list, they focus on using high-quality ingredients and making their ice creams fresh, in-house.

This summer a very Israeli flavor experience can be had when you try their salted cashew flavor. Reminds us of a favorite Israeli snack to eat while watching the big soccer match. Other flavors to look out for? The ever-popular Kinder Bueno candy bar-inspired ice cream, and mint arak.

What started off as an ice cream destination in the northern town of Maalot-Tarshiha has now expanded to many more locations, namely in Kibbutz Sasa (where they hold ice cream workshops!), the Hula Valley and several locations in Tel Aviv.

Turning into a local ice cream empire, Buza, meaning “ice cream” in Arabic, is not one to shy away from beautiful Israeli flavors such as candy-like mango, sea-salt-laced chocolate and of course, sabras sorbet, the prickly-pear cactus fruit that also happens to be the nickname for native-born Israelis.

Take a rich natural frozen yogurt, then inundate it with the most Israeli of toppings, including dates, passionfruit and chocolate cereal. Or try an acai smoothie or yogurt bowl. This is what’s on offer at Tamara, the frozen yogurt branch of the famous TLV fruit shake (smoothie) bar. There’s always a queue out the door of the shop and in front of the stand, so you know Tamara’s on to something special.